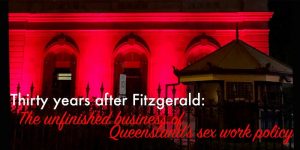 In July the CJSDRC launched the first of its briefing papers, The Case for Decriminalisation: Sex Work and the Law in QLD’.

This month the paper will be re-launched at Queensland State Parliament,by Centre Director Melissa Bull, at an event sponsored by Peter Russo, State Member for Toohey. If you are interested in reading and hearing more about decriminalisation, join the Respect Inc and #DecrimQLD in Brisbane Parliament House for a solutions-focused Symposium on the unfinished business of the Fitzgerald Inquiry Report. The Fitzgerald Report recommended significant changes to prevent the continued misuse of police powers. Thirty years later sex work remains in the Criminal Code. At this Symposium you will have the opportunity to hear the concerns and solutions from experts in the field of sex work policy. More about the event can be found below.

In response to the Fitzgerald Inquiry, the Prostitution Act 1999 (Qld) introduced a brothel licensing system but left the Criminal Code 1899 (Qld) intact. The 1999 legislation criminalises sex workers working in pairs and massage parlours, and regulates only 20 brothels. Standard practices such as hiring a receptionist, texting another worker when a client arrives and leaves, are illegal. Police powers include immunity when posing as clients undercover. Police now actively prosecute sex workers for implementing safety strategies, with charges up by 126%, and for incorrect wording in sex work advertising, with charges up 450%. The ‘criminals’ are predominantly women over 30; they are fined up to $6,000. Access to justice is impeded. The unintended consequence of the lack of action on this issue is that basic safety strategies are criminalised. Everyday, sex workers in Queensland must choose between working safely or legally.

The evidence is that decriminalisation is the best model of sex industry regulation. It is a system that would bring all sex industry businesses under Queensland’s existing robust business and industrial regulation. Repealing outdated laws would finish the work of Fitzgerald and provide safer working conditions for sex workers, free from fear of arrest.
This symposium is sponsored by Peter Russo MP, State Member for Toohey.

Photo ID and a ticket are essential for Parliament House events. 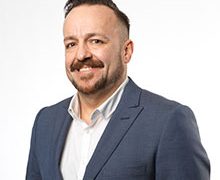 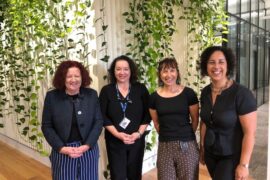