Lancaster University is in a beautiful location in the picturesque north of England. It was just a quick 2-hour train trip up from London Euston, a trip I made many times over the 3 months I stayed in Lancaster. It has great facilities, with over 12 different colleges, all which provide living space on campus and of course their own bar. All are perfect for an afternoon game of pool, darts and any other game of your choice. It is a proud university town, even once you get to the train station it loudly proclaims that it is the home of Lancaster University.

The on-campus accommodation was everything you could have asked, however the bathroom was slightly cramped. Despite this, the on-campus facilities were amazing. The University had everything you needed, with two small general stores, and plenty of takeout options. There were also numerous cafes for the coffee starved brain of any student; although just don’t expect it to be quite up to the Australian standard!

The cultural shock of going to England was pretty much non-existent, I think some of the Southern English found it more shocking to be up North than I found it halfway across the world. With the amazing transportation system a train ride could take you  almost anywhere in a short amount of time. Once in London, the tube also takes you wherever you need to be, in a matter of minutes.

Living in England made living away from home very easy. Although there are times you can still become a little home sick, when you think about how far away you are from your family. It also took me a while to adjust to the amount of daylight in the UK. In Summer it is still light until 10pm, and in Winter the sun sets by 4pm, which can be difficult.

Overall, the trip was unforgettable and there were many highlights throughout. On one occasion, my flat mates and I decided to hold a ‘good old Aussie BBQ’. I thought it would be a great idea to show my fellow international residents what it was like. We had one Cypriot, a Bulgarian and two English men along with myself, an Australian. The only thing that we did not consider was the fact that the temperature was only a little over freezing. In the blistering cold conditions, I like to think at least the food was good enough to get across what the essence of an Aussie BBQ is like…

As everyone says, exchange is an incredible experience. If you have the opportunity, grasp it with both hands – you will not regret it. 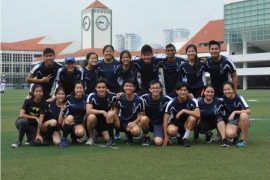