I had an amazing sem

ester of exchange attending Queen’s University in Ontario, Canada. It was definitely a worthwhile experience and if I had the chance I’d do it again. Being on the other side of the globe, attending in the winter term in which the country experienced one of their harshest winters in decades could have been a setback, but it didn’t stop me from having the best time in true Canadian conditions.

Studying at the Smith School of Business (Queen’s University)
Classes at Queen’s were different with the university approaching their teaching style in a different way. Firstly the majority of my commerce classes required participation, of which consisted of 5-10% of your grade. This not only meant attending every class (even the early 8:30am sessions) but actively engaging in discussion with your professor and classmates. Nothing is recorded so you are unable to watch lectures online, however all my professors supplied the powerpoint slides on their version of Blackboard. This may be a turn-off for some students used to the QUT arrangements, but in attending one of Canada’s leading and most competitive business schools, the professors were some of the best in the country and were all actively engaging and friendly. You will most likely end up building a great rapport with them and they are always happy to help when needed – they especially like Australians.

Living at Queen’s
Life at the university was comparable to a lot of the college stereotypes. I lived in a great share house which was only a 2 minute walk from my classes. My housemates were really welcoming and the students you meet are definitely professionals at balancing their busy academic and social lives. Queen’s definitely has the best student culture I’ve ever witnessed and it won’t take long to feel right at home. The only thing that took some getting used to was the weather – one day it would be -25C with snow and wind chill, the next it would be raining with sleet and dangerously slippery ground. Coming from the sunshine state of Queensland it was definitely different, but it was great to experience something different from the norm.

The Exchange Program
The ETC (Exchange Transfer Committee) at Queen’s were extremely well-managed, who truly integrated foreign exchange students from all around the globe into the country hosting multiple events to meet other students who are in the same shoes. The executive committee is partly run by students in their 4th year, each of which became some of my best mates. They arranged multiple events and trips, from visiting Montreal and Ottawa for weekend visits, viewing live hockey games, maple syrup farm visits and overall a tonne of social events. They also have a buddy program where you’ll get to meet more local Canadians who can provide local information for anything from class registration to travel tips.

Finances
I cannot over-emphasize the importance of a budget on exchange. The cost of living in Canada on face value is very similar to Australia, however after currency exchange, you will end up losing a fair bit of money outside of your allocated budget. Tax isn’t included on price tags and tipping is expected in multiple venues, this took some getting used to. Rent and utilities are often around $600-700 a month depending on the house, and I often used $85 CAD a fortnight for food. Most grocery stores offered cheap Tuesday/Thursdays for students, so I saved my shopping for then. Health insurance is a compulsory offering by the university however it is extremely affordable, you’ll have to pay for this on the first month of visiting. The two main setbacks are phone plans and transport – both in Ontario are extremely expensive so budgeting for their payment was vital.

Benefits
I had the chance to experience a lot of what Canada has to offer, from Toronto and Montreal on the Eastern side, to the Banff/Alberta and Vancouver on the west. Each region has a tonne to see and do, from camping/hiking in the Rockies to enjoying poutine and Canadian drinks in the French Quebec area. Overall exchange in Canada was the most worthwhile experience, and having made close mates from all around the globe, I would recommend it to anyone. 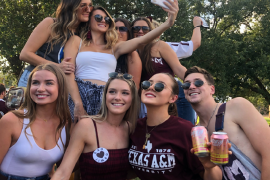