Can Mis- and Disinformation Push Societies to the Brink? 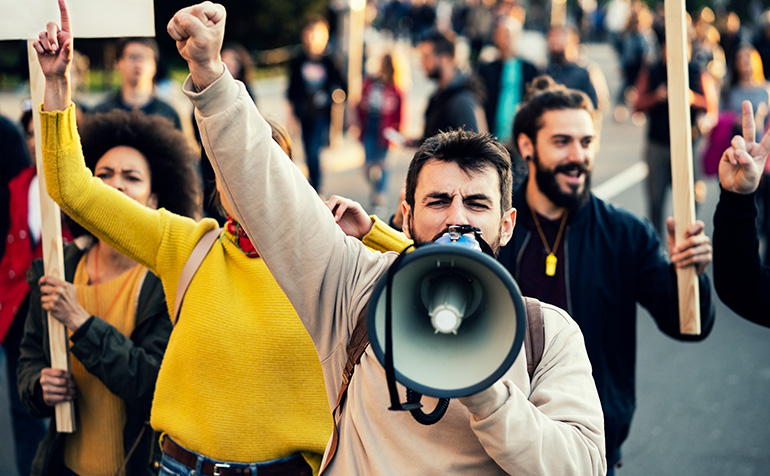 Polarisation is not a new concept in sociology, but the digital media’s role in enabling and fomenting hyperpartisan politics may be more complex than previously thought. According to Professor Axel Bruns, the dynamics of polarised political debate could threaten the very fabric of our society.

Axel Bruns is a Professor at the Digital Media Research Centre at QUT, and a Chief Investigator at the ARC Centre of Excellence for Automated Decision-Making and Society. His impressive work on the subject of online media has fortified his position as a leading voice in the field. Testament to this is Prof. Bruns’ recent  Australian Laureate Fellowship – a unique honour.

Only 17 Fellowships are awarded each year and Prof. Bruns is the only person in the discipline of Media and Communication ever to receive one. It provides world-class researchers with considerable project funding, allowing them access to advanced resources to make ground-breaking discoveries.

Prof. Bruns plans to use his Fellowship to investigate the activities and motivations of hyperpartisans, and digital and social media play in enabling them. It’s a project that holds urgency as now, in an age of extreme politics and a raging pandemic, polarisation endangers the cohesion of society when we need it most.

In anticipation of his upcoming Real World presentation exploring these issues, I sat down with Prof. Bruns to shed some light on his research.

Prof. Bruns presents at the next Real World Futures event

This free event is available online and in-person, however, registration is essential.

My name is Ella Holding-McGrath and our guest today is QUT Professor Axel Bruns. Doctor Bruns is an Australian media scholar and a researcher inside the Centre of Excellence for Automated Decision-Making and Society. He was also recently awarded an Australian Laureate Fellowship, which is one of the nation’s highest honours.

Welcome, Doctor Bruns.  Let’s talk about your fellowship. What exactly is it?

Axel: The Laureate Fellowship is basically a personal award from the Australian Research Council. There are only seventeen per year that are given out. They tend to go to research leaders in their fields. This is actually the first time that one was awarded in the field of Media and Communication. Very often they go to the STEM disciplines, the Scientific disciplines. This essentially enables me now to build a team of PostDocs and PhD students for a project that will investigate polarisation and partisanship in Australian online media, and in fact in online media beyond Australia as well.

Ella: Right, so you said you’re the first from your discipline, how many other Fellows in total were nominated.

Axel: There are only seventeen per year. It’s a very competitive scheme, so there is a fixed number of people, grants that are awarded each year, and they are very, very competitive grants.

Ella: And out of all of those seventeen how many exactly are from the Humanities?

Axel: Just me, just me really this year, and very rarely are there any others in the Humanities.

Ella: Why do you think there is such a small number from the humanities?

Axel: It’s in part because there is, of course, very important research going on in the STEM disciplines. But in part, it’s also a self-perpetuating process, of course. The more of these Laureate Fellows you have in STEM the more you end up getting in the future as well, so we in the Humanities have been lagging behind in getting these Fellowships, and hopefully, this will now help also in encouraging others in my discipline to apply f for these Fellowships.

Ella: It’s such a huge honour, such a great opportunity. What are you planning to do with the Fellowship?

Axel: Yeah, the project essentially is a project that will investigate polarisation and hyperpartisanship in online media, in online discussion, online discourse. We’re interested in this problem of polarisation because of course, we’ve seen over the last few years this is a growing issue in the world, but quite possibly also in Australia.  We’ve seen some signs of it here in Australia, which is not certainly anywhere as bad as we’ve seen it over the last few years in the US and perhaps in the UK as well, and some other countries, but it is a problem that we need to be aware of… that we need to prepare for… because polarisation, hyperpartisanship divisions in society around political and other topics can be incredibly damaging of course. They ultimately undermine good governance, they undermine society, societal cohesion, and of course when that happens very quickly see the fabric of society itself actually starting to fall apart.

Ella: And with this polarisation what are the driving factors behind it?

Axel: There are a number of factors I guess that we can identify already, but the research will investigate them further, of course. One is, of course, there is in some environments, in some systems a very strong political polarisation already in the system, so systems like the one in the US, in the UK, to some extent in Australia as well, are usually built around two major party blocs, and so there is an inherent polarisation already in there. There are two sides, and they battle it out for supremacy essentially in politics. In other systems, you have less of that because you have European multiparty systems that are based more around consensus building and various parties forming changing coalitions over time. So, in those systems, there is a greater incentive for parties to work together, for politicians to work together rather than just to fight to be at the top. In other contexts, of course, you have polarisation that might be around different matters. We’ve seen this in the UK with polarisation right through parties on the matter of Brexit for instance. We’re seeing right now, a lot of polarisations, a lot of hyperpartisanship around the correct response to COVID, and whether we should go into lockdown’s, take vaccines, and so on. What we should do in terms of economic and other policies around these sorts of issues. Some of that is not linked to party lines but actually really splits parties themselves in part as well. So, we see these kinds of drivers; of course, there are other factors, economics, and other social and societal differences that might generate splits within society. So, all of these have an impact and then on top of that often you have an exploitation of these divisions by populist politicians and others, but potentially also by outsiders, of course, state actors, state intervention from other sources outside of the country, as it has been speculated that that’s been the case of course in the US as well.

Ella: So, is there anything else you’d like to add?

Axel: This is an ongoing research initiative, of course, and part of what we’re doing here is also to really understand the impact of different media in all of this. So, we’ll be looking at mainstream media as well as social media. We’ll be looking at new forms of media coming along as well, new platforms coming along, and what impact they have. The project runs for five years, so we’ve got plenty of time to also look at new platforms and new forms of expression that might emerge during that time. If you think that five years, for instance, we didn’t really have things like TikTok and Snapchat and so on, so there’s every chance that new platforms will come along and might make a significant difference again too. So, we’re very interested to see with this how this plays out, as the media environment itself continues to change and evolve of course, and that itself will also have a really big impact on what we end up seeing in terms of the dynamics of this kind of polarisation. So watch this space. We’re starting in earnest in early 2022 and will assemble a team of a number of PostDocs and PhD students to really work with me to research this problem.

Ella: It’s really great to hear about everything you’re doing with the Fellowship and I’m very keen to see the outcome of all your research. Thank you so much for joining me here today Doctor Bruns.

Ella: My name is Ella Holding-McGrath and this is Real World News. See you next time.

Ella is a 4th year journalism and physics student at QUT, aspiring to join the workforce of science communication. She is a driven and charismatic reporter, with the ability to adapt and accept the opportunities that arise to her. While completing her studies, Ella has carried out a number of studio interviews and features for Real World News, a student-led program based in Brisbane that explores the people and events of the local area. 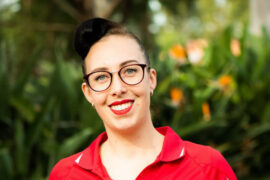 PSMP Scholarship Gave Me the Confidence to Achieve My Goal 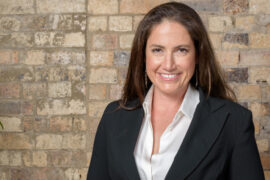 Program Helps Inspire Leigh on Her Pathway to Politics 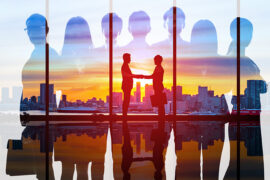