The 12th QUT Executive Masters International Study Tour concluded at the end of May, and another cohort of students have had the unique opportunity to engage at a senior level with project complexity on a global scale. The study tour is undertaken as a capstone unit of the Complex Project Leadership (CPL) concentration in the second year of the QUT program and has been a distinctive feature of the QUT’s focus on complex project leadership since 2008.

The objective of the Study Tour is to explore how global organisations manage large and complex programs, with a focus on leadership, stakeholder engagement and decision making, as distinct from the purely technical or engineering aspects of a program. Typically, over a two-day period, engagement features a range of presentations by senior executives on subjects relating to project and program management, HR and culture, innovation and knowledge management, as well as client, stakeholder, and supply chain management.

Following this, clients typically present a Red Team Challenge outlining an issue that a nominated student group responds to on the second day. The second day usually features a facility tour before lunch and concludes after lunch with the student group’s Red Team presentation prepared overnight. The Red Team Challenge has proven very valuable to both client sites and students, and although demanding, provides students with the opportunity to combine observations with their experience, expertise and learning from the program. For clients, it provides the unique opportunity of an informed outsider’s perspective on a given real-world challenge framed to contribute strategic or operational value.

This year’s tour started in the UK with a visit to Her Majesty’s Court and Tribunal Service (HMCTS) at the Ministry of Justice (MoJ) in London and finished in Fort Worth Texas at Lockheed Martin visiting the F-35 production facilities at Air Force Plant 4. In between, the tour visited Rheinmetall Defence in Unterlüß Germany and Boeing in Seattle.

Although different every year, the intensity of the experience is an additional challenge to students who this year, in addition to seven full days of project engagement, spent almost 60 hours in the air, 20 hours in airports, and 10 hours in coach transfers. Host organisations of recent study tours have included BAE Hägglunds in Örnsköldsvik Sweden; Naval Group in France; Huntington Ingalls in Virginia; Safran Electronics in Paris; Airbus Helicopters in Donauwörth Germany; Pilatus Aircraft in Stans Switzerland and Airbus Space in Toulouse France.

HMCTS is an executive agency of the MoJ that is responsible for the management and administration of the courts and tribunals throughout England and Wales, with a caseload in excess of 4.4 million across criminal, civil, family and tribunal jurisdictions. Established in 2011 as a partnership between the Lord Chancellor (the minister responsible to Parliament), the Lord Chief Chancellor (the president of the courts in England and Wales) and the Senior President of Tribunals (a separate judicial officer), in 2016, they embarked on an ambitious digital transformation of the British justice system. Now in its third phase, the reform project is ramping up the delivery of its vision to modernise and upgrade the entire justice system and create the finest legal system in the world.

The students heard presentations from, and engaged with, senior HMCTS executives across a range of topics from past achievements through current initiates to future plans. Susan Acland-Hood, (CEO) and Richard Goodman (Change Director) provided overviews of the transformation project situated within historical, strategic and operational contexts that framed subsequent presentations around digital platform delivery and development, program governance, supply chain management, communications management, organisational culture and the management of user experience.

The number and variety of stakeholders, enablement projects, and service delivery scenarios created a challenging scope and scale context for the Red Team Challenge which was delivered after engaging visits to the Royal Courts of Justice (RCJ) and Central Family Court in Holborn. Opened in 1882 by Queen Victoria, the RCJ provided a stunning visual and contrasting experiential metaphor of the system being transformed by the HMCTS reform project and provided rich conversational food for lunch at the Australia Centre where the group was joined by His Excellency George Brandis the Australian High Commissioner.

After departing London, the group travelled via Hamburg to Unterlüß, the home of Rheinmetall Defence. Founded in 1889 but heavily disrupted by two world wars, Rheinmetall Defence has grown to almost 12,000 employees and has developed a portfolio of 1,500 products across armoured vehicles, weapons, and ammunition. Importantly for Australia, Rheinmetall will deliver 211 Boxer Combat Reconnaissance Vehicles (CRV) to the Australian Army under the LAND 400 Phase 2 program.

Welcomed and introduced by Ben Hudson (CEO), the students were provided with an overview of the Vehicle Systems Division, within both a strategic and historical context before touring the ammunition production facilities. Subsequently, in relation to the Land 400 program, students engaged around presentations that covered program governance, engineering and innovation before unpacking the Red Team Challenge in the afternoon. The following morning commenced with a tour of the PUMA Infantry Fighting Vehicle assembly line before presentations on stakeholder engagement, human resources, culture, and supply chain management. The day finished with the Red Team presentation that explored technology, product and market opportunities for Rheinmetall.

After a brief morning stopover in Hamburg and a night at Heathrow Terminal 5, the study tour eventually arrived in Seattle to engage with the P-8 program at Boeing. Built for intelligence, surveillance and reconnaissance the P-8 is capable of military as well as humanitarian search and rescue operations, and importantly, as a derivative of the 737-800, features streamlined efficiencies and reduced production costs as a result of the unique in-line production system.

The students were welcomed and given an overview of the commercial derivative program by Tim Peters (VP Derivative Aircraft) and Fred Bruner (P-8 Program Manager), before detailed presentations pertaining to the P-8 program, engineering, innovation management, supply chain management, human resources, and organisational culture. Students were hosted to a thoroughly engaging tour of the P-8 installation and checkout facility, as well as the 737 final assembly at Renton. The visit provided the students with a unique window into the complexities of such a large production facility.

The final two days of the study tour were spent in Forth Worth Texas, visiting the F35 Joint Strike Fighter project at Lockheed Martin. Following the first F35 in 2006, there are now more than 400 planes flown by more than 840 pilots out of 19 bases worldwide. The supply chain of more than 1,400 suppliers combines with Lockheed Martin’s flow-to-takt assembly process to move aircraft components from one build station to another along an assembly line that is housed in a massive 1.6km long factory building. This lean approach to production planning minimises downtime, eliminates wastage, and reduces costs. The multi-purpose fifth-generation stealth fighter project provided a unique opportunity to engage with a number of scale and sustainment complexities.

After being warmly welcomed by Doug Wilhelm (VP Customer Programs) and Todd Reinders (Deputy Program Manager, F-35 Australia), Steve Over (Director, International Business Development) provided an overview of the program and the capability strategy driving the program. Following this, Dan Bennett (Director, Sustainment Readiness Integration), himself a graduate of the QUT program, moderated a panel presentation and a number of presentations covering development, sustainment, production, human resources, and culture, before describing the Red Team Challenge. First thing the following morning, students got up close and personal with the cockpit demonstrator before an in-depth tour of the production facility, originally built in the 1940s to produce the B-24 bomber. The afternoon response to the Red Team Challenge featured the student’s recommendations and a rich Q&A session around to Lockheed Martin’s role and positioning as a sustainment partner to F35 customers.

As with previous year’s experiences, this year’s study tour provided an immersive and challenging opportunity for students to engage with a diverse range of project complexities across diverse global contexts.

QUT is pleased to be able to leverage a world-wide network of high performing leaders working in a range of complex project contexts to support it’s #1 ranked Executive MBA and it’s continued focus on Complex Project Leadership through practical, experiential and real-world learning.

This article was originally published in the quarterly Connect Magazine from the International Centre for Complex Project Management (ICCPM) in September 2019. 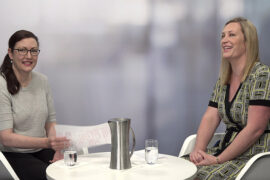