November 11 is Remembrance Day, which commemorates those who lost their lives in war, conflict and military service for Australia.

Traditionally, a silence is observed at 11am on the 11th of November, which comes from the “the 11th hour of the 11th day of the 11th month”: the time and date that the armistice between the Allies and Germany ended the First World War in 1918. 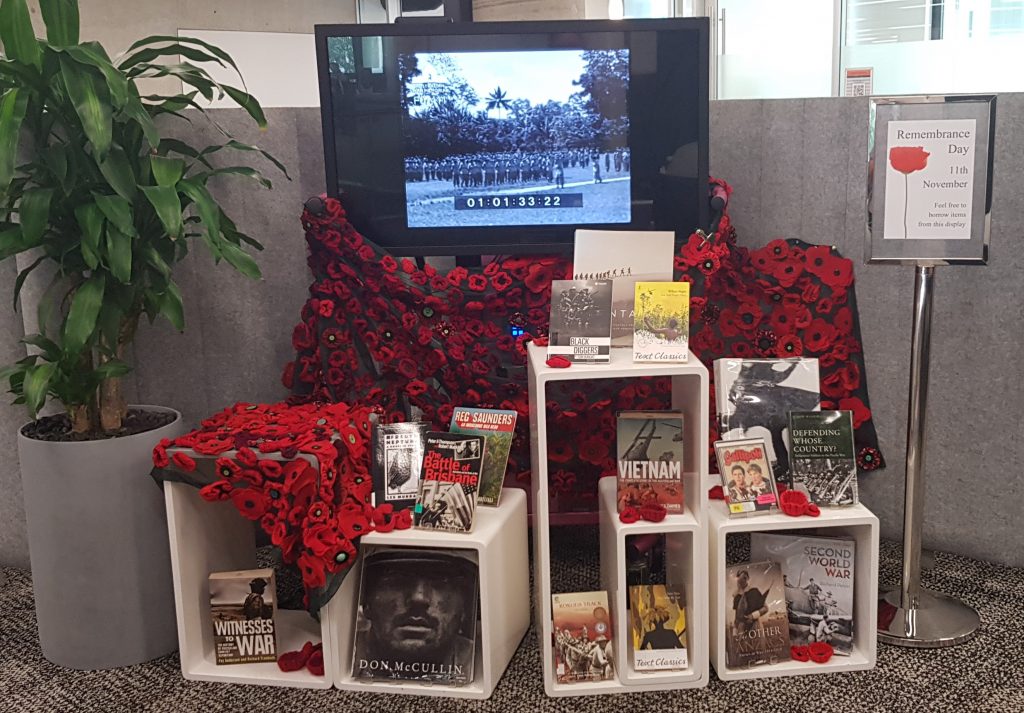 Remembrance Day is also observed in other nations, sometimes by another name like Memorial Day or Veterans Day.  The day is observed in the USA, Commonwealth countries including Canada, New Zealand, South Africa and many Caribbean nations, France, Belgium and Serbia.

Originally known as Armistice Day, Remembrance Day was first meant to commemorate those who died in WWI. But since WWII, the day came to include people who had died in later wars too.

Remembrance Day traditions generally focus on members of the armed forces and military who died in conflict, but other people may be commemorated too. Casualties of conflict or peacekeeping missions include civilian nurses and medical staff, members of auxiliary services (including women’s auxiliaries), humanitarian volunteers, war correspondents and police officers assisting in peacekeeping activities.

Red poppy flowers are used in Remembrance Day traditions, and are a common symbol of commemoration of those killed in conflict. Red poppies grew in the churned-up soil of the Western Front in WWI, and their bright red colour eerily evoked the spilled blood of fallen soldiers. 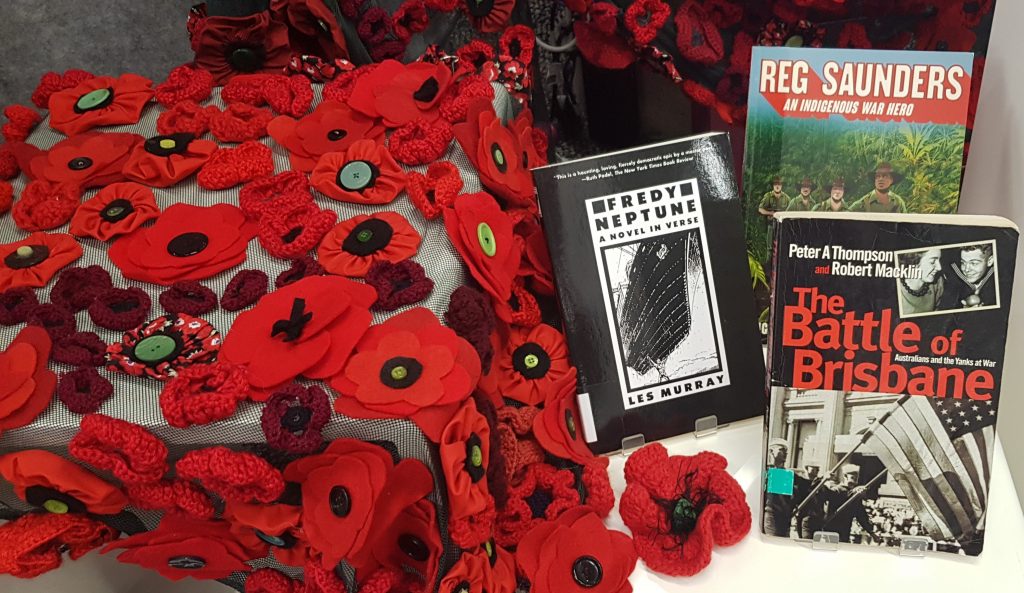 Remembrance Day ceremonies commonly include the Last Post bugle call, which was used on the battlefield to announce the end of the day’s activities and the time for sleep. It is now also used at remembrance ceremonies and military funerals to signify that the soldier’s duty has ended and they can rest in peace.

Take a moment to view the display at the Kelvin Grove Library on level 3 (pictured above) and feel free to borrow any displayed items.

The Cube at QUT Gardens Point is hosting a free digital exhibition from 2-11 November to commemorate the Queensland soldiers and families who answered the call from the British to join the First World War. It incorporates their stories and images to bring to life their journey to the front, repatriation and the return home.

There are also stories of events and places that helped to shape Queensland to be the place it is today. More information is available at http://www.thecube.qut.edu.au/cube-screens/2018/anzac.php?short.

There is also a curated display in Old Government House at Gardens Point from 11 October to 11 January 2019 and is also free. http://www.ogh.qut.edu.au/whats-on/2018/invincible-spirit.php

On the 11 November, there are events all over the country and state that you can attend to show your support. Find out more at https://anzac100.initiatives.qld.gov.au/.

QUT Libraries have a whole host of material on the First World War if you want to do your own investigations. For the school teachers among you, there are kits available to share with your classes. 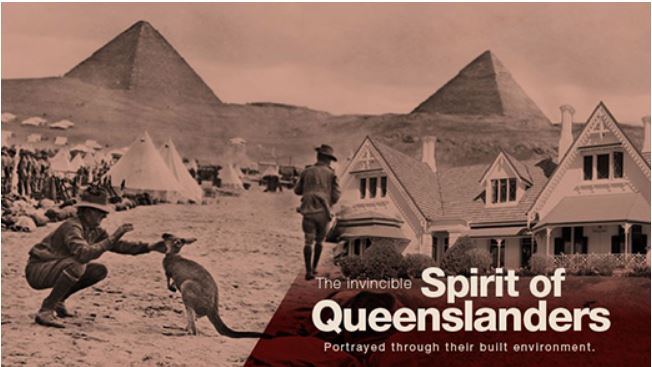 The Invincible Spirit of Queenslanders – Portrayed through their built environment

The 11th of November marks the anniversary of the Armistice which ended the First World War. Each year on this day, a minute’s silence is observed at 11am, in memory of those who died or suffered in all wars and armed conflicts (Australian War Memorial).

The red Flanders poppy is the symbol of remembrance that commemorates the First World War. Wild red poppies flourished in churned up mud and soil in the battlefields of the Western Front during the war. In 1921, the red Flanders poppy became the British Legion’s official emblem. Today, red poppies feature in sprays and wreaths laid at memorials, at memorial services and military cemeteries. Cloth poppies are worn in memory respect of those who gave their lives.

Available through the QUT Library, this documentary, Not Forgotten, presents individual stories from the First World War and unlocks “the experience and the legacy of the Great War on a personal, family, community and national level, and ensuring that 90 years later, these names are not forgotten.” 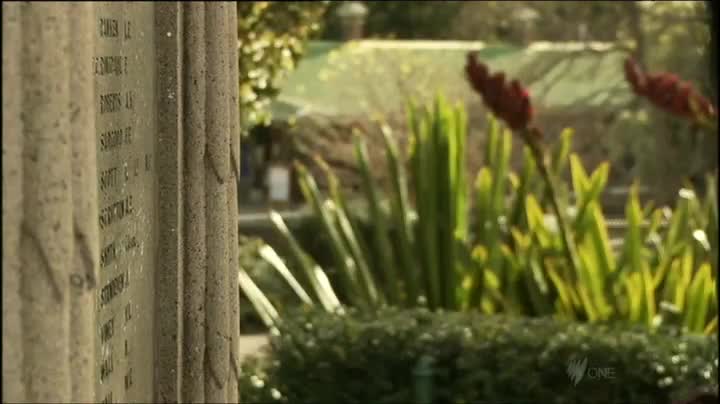 We will remember them. Lest we forget.

Today is Remembrance Day, also known as Armistice Day. At the eleventh hour on the eleventh day of the eleventh month, we pause for a moment’s silence to remember those who have suffered and died in war.

There are very few of us whose lives have not been affected in some way by the wars of the 20th and 21st century. Either in this generation or an earlier one, there will be an event which has had consequences for you as an individual. It could have been your ancestor’s death or injury in battle, but it could equally well be related to mental and emotional trauma, forced displacement or emigration. One way or another, war and its consequences have probably shaped your life. 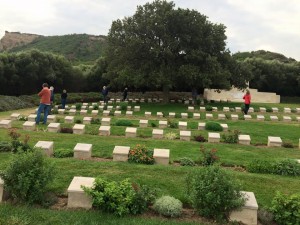 A few weeks ago, I visited Gallipoli  with my husband, who was keen to visit the grave of his great-uncle George. Dawn over the Dardenelles was beautiful. What awaited us was beautiful too – but in a profoundly heartbreaking way. 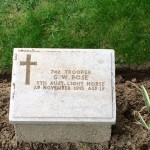 The Commonwealth War Graves Commission does a magnificent job of maintaining military cemeteries around the world, and Gallipoli is no exception. The WW1 Pictorial Honour Roll of Queenslanders gave us all the information we needed about George Rose, including the grave location in Ari Burnu Cemetery, a photograph and a physical description. George William Rose was 5″9′, with a fair complexion and gray eyes. He was a country boy, so he joined the 5th Light Horse.

George arrived with the reinforcements in November 1915. He lasted just nine days. He really was only nineteen, just like the song says.

In 1934, Mustafa Kemal Atatürk wrote a tribute to the Anzacs killed at Gallipoli:

Those heroes that shed their blood and lost their lives… You are now lying in the soil of a friendly country. Therefore rest in peace. There is no difference between the Johnnies and the Mehmets to us where they lie side by side here in this country of ours… You, the mothers who sent their sons from faraway countries, wipe away your tears; your sons are now lying in our bosom and are in peace. After having lost their lives on this land they have become our sons as well. 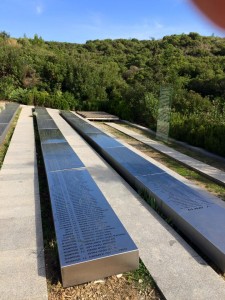 Memorial list of the dead in a Turkish mass grave. [Denise Frost]

Yes, these are deeply moving words, but consider them in context….

The casualties were appalling – hardly surprising when you look at the hilly terrain and the almost impenetrable scrub. Furthermore, the total of 8,709 Australian deaths does not include the dreadful toll taken by diseases like typhoid and dysentery.

Turkish losses, on the other hand, are almost beyond comprehension. Estimates are close to 70,000, with some sources saying over 200,000 when illness is included. The Turkish dead were buried in mass graves, marked only by endless lists of names.

On Remembrance Day, we should remember them all, allies and enemies in so many armed conflicts – and the families they left behind.