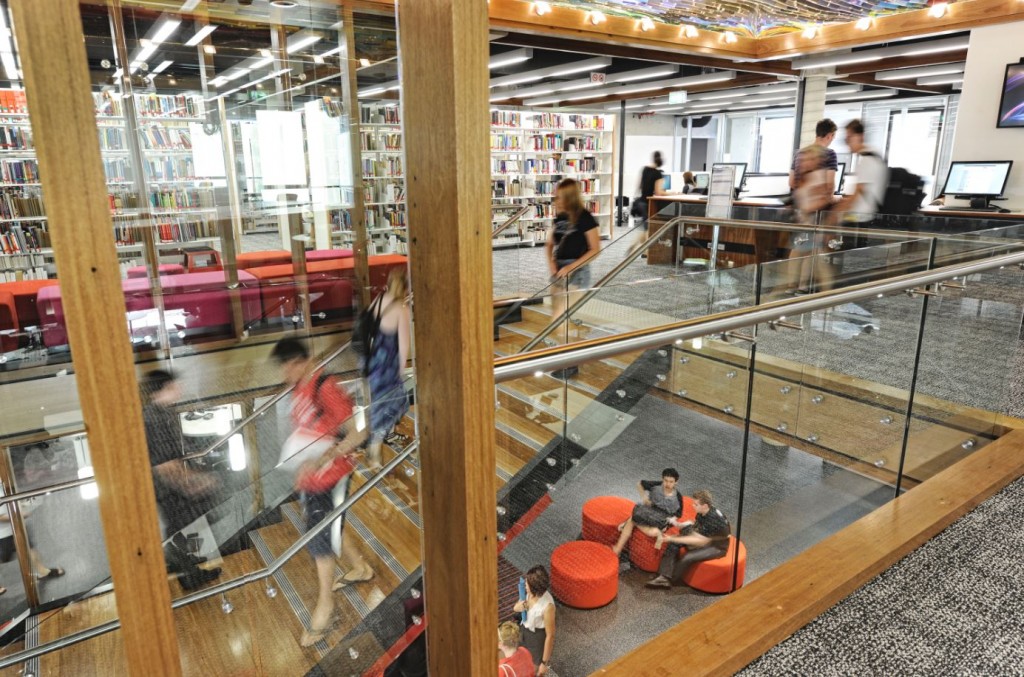 It’s Orientation Week at QUT and the library is bustling with students (and librarians!) returning after a long and enjoyable summer. There is plenty happening on campus (orientation activites, and some new cafes and places to eat), but don’t forget to visit the library to get your free copy of QUT cite|write and join our workshops and tours as you prepare for the semester ahead.

Our workshops cover a lot of useful study skills for new (and returning!) students:

There are workshops scheduled throughout the week (and continuing into semester) so check out our registration page or stop by the library’s Learning and Research Desk to chat with a Library Adviser about how to sign up.

Last week we looked at the newspaper reading areas in each branch library, where you can come in and browse major daily newspapers from around the country and around the world. 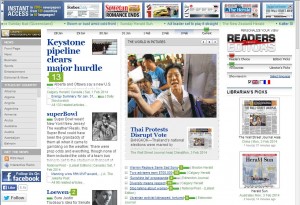 QUT Library also provides online access to these newspapers (and many, many more) through Library PressDisplay. Library PressDisplay is a full-colour, full-page collection of today’s newspapers from around the world. You can browse by region or title, and with an archive going back sixty days you can catch up on the recent and more-than-recent news.

When you have found the newspaper you want you can:

There is also an app for mobile devices called PressReader. You can download up to five titles per day, with the option for autodelivery of new issues. Initial content setup must be completed while connected to the QUT wifi network.

You can find a range of major Australian newspapers in the newspaper reading area at each campus library. The Courier Mail and Sunday Mail, the Australian and Australian Financial Review are available at all libraries. Additionally Gardens Point library holds The Age, the Sydney Morning Herald, the West Australian, Koori Mail and Torres News (as well as some major newspapers from China, India and Malaysia). 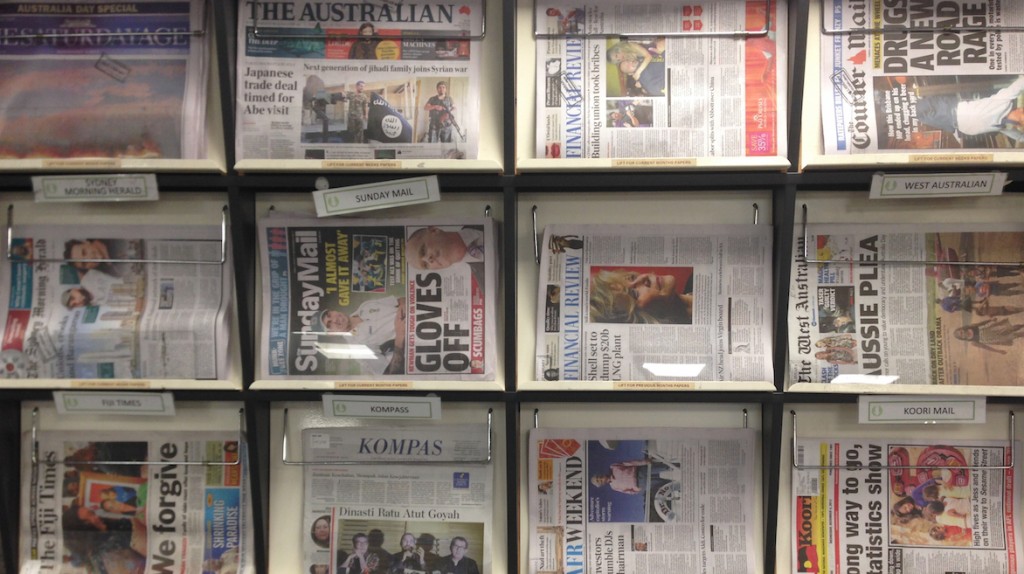 It’s a good place to start the day with your coffee and catch up on what is happening in the world, or chill out between lectures.

Of course our newspaper titles are available online too, and you can access them from our newspapers and news media collections page.

Just as social media has become a regular tool we use in our daily lives to connect with our friends and the world around us, it has also become an important resource for students and researchers looking for the very latest and most relevant information. One place with the very latest information–and directly from the source–is Twitter.

So with all this highly relevant information being published in the twittersphere by the second, how do you cite it? Well it’s quite simple – you just need to focus on taking the four pieces of information that form a reference (author, date, title, source) and putting these elements in the correct order.

Can you build a reference from the following historic tweet? 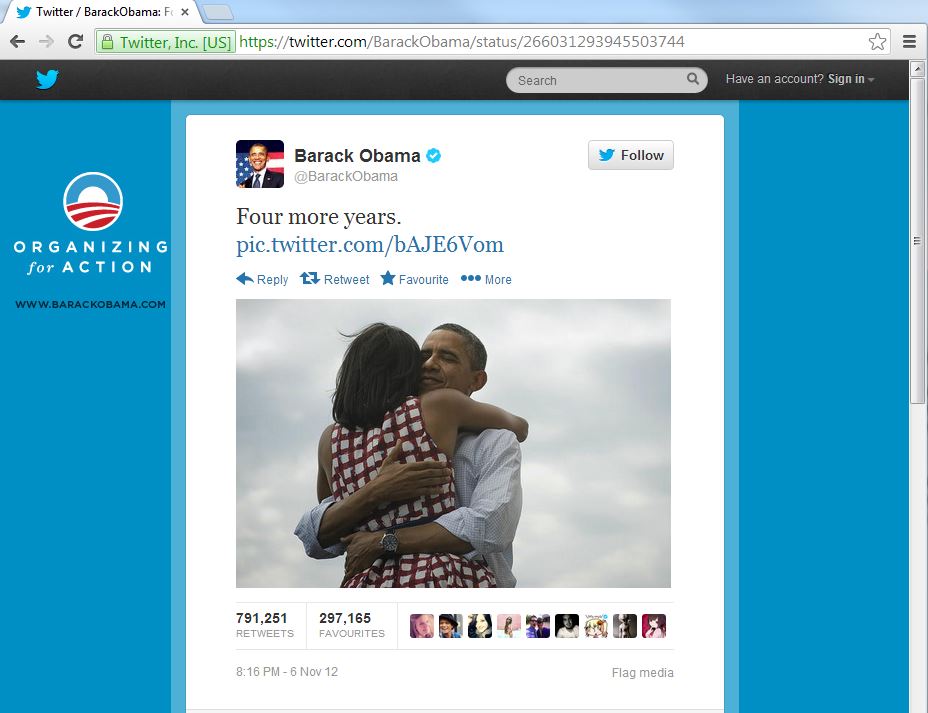 We did, and this is how we did it. Our first step was to identify those four key elements common to all references:

Author: BarackObama [We use the author’s name as it appears in the source, and Barack Obama’s twitter handle is BarackObama]

Title: Four more years: pic.twitter.com/bAJE6Vom [Because a tweet is already so tiny, you can use it in its entirety as the title]

Source: This is hidden from the regular tweet view, but if you click on the “Details” link within any tweet, you are taken to that tweet’s unique url, which in this case is https://twitter.com/BarackObama/status/266031293945503744

Once you have identified these elements, building a reference is as simple as putting those elements in the correct order. Be aware that as this is an evolving area, the main authorities for referencing may not have covered this in their manuals yet. For example the Chicago Manual of Style only provides examples for websites and blogs. But as you do with all referencing, we have followed the spirit of these and other guidelines, and come up with some formatted references for a tweet for the three main styles used at QUT. 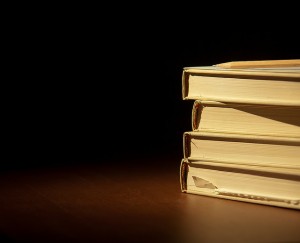 QUT Library now provides access to the following excellent new online reference sources. Reference sources are a good starting point for any assignment or research topic, as they can help to clarify concepts and keywords, as well as provide an overview of a subject. They include dictionaries, encyclopaedias, directories, handbooks and manuals.

Please make use of these excellent resources to support your learning. 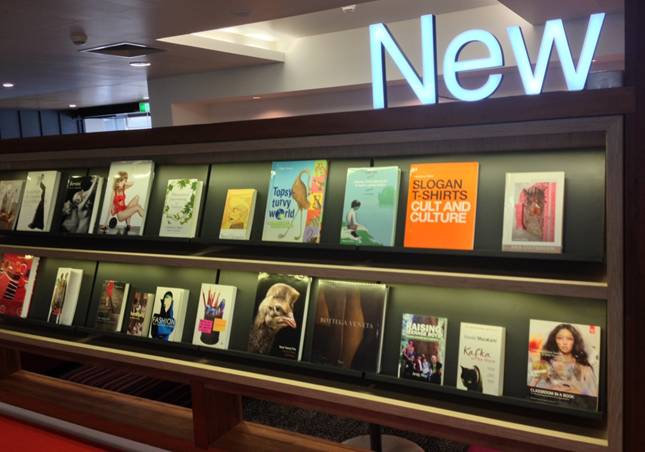 New books are always arriving at QUT Library. And ahead of a busy semester among the boxes of textbooks making their way to the shelves there are also a huge range of books on art, politics, fashion, advertising, science, literature and business.

At Kelvin Grove you can keep up-to-date with new arrivals by visiting the new books display on level 2. This week’s new arrivals include Slogan T-Shirts: Cult and Culture, Topsy-turvy World: How Australian Animals Puzzled Early Explorers, Epica Book 25: Europe’s Best Advertising, Motivational Interviewing in Groups, Kafka on the Shore and In My View: Personal Reflections on Art by Today’s Leading Artists. The new Caboolture library will also have a new books display.

You can also explore the full listing of new arrivals on our new titles page.

And remember that if there is a book you like that is at another campus you can place an intercampus request to have it delivered to your branch library.

With Christmas just around the corner, your librarians at Kelvin Grove noticed that there was a certain seasonal something missing from the library…

Carefully constructed of precisely placed bound journal volumes (and complementing the beautiful book ceiling above the stairway) this festive creation can be found on level 2 of QUT Library Kelvin Grove in the main foyer.

During the Christmas and New Year period all QUT branch Libraries will be closed  from Monday 24 December to Tuesday 1 January inclusive.  We re-open on Wednesday 2 January 2013.

Check the QUT Library website for our opening hours.

We would like to wish a very merry Christmas and happy holiday season to all!

Hanging to see The Hobbit when it opens later this month? Why not catch up on your Middle Earth history by watching the Lord of the Rings in the meantime?

QUT Library has an extensive DVD collection to support learning and teaching for students in Creative Industries, but it’s also there for everyone to enjoy too.

The Lord of the Rings Trilogy, The Dark Knight, Prometheus, The Avengers, The Hunger Games and many more blockbusters are available from the shelves of QUT Library.

Perhaps you prefer television. We have that too! Creep out with a season of the X Files, puzzle through Lost or catch up with some Gilmore Girls.

You can search for movies and tv shows using QuickFind or our DVD and Video search. But if you just want to browse the shelves to find something interesting to watch head on up to level 4 of QUT Library Kelvin Grove. You’ll find our DVD collection at the 791 call number range.

Don’t worry if you can’t get to Kelvin Grove. DVDs can be delivered to the Gardens Point, Law and Caboolture libraries by placing an interlibrary request. 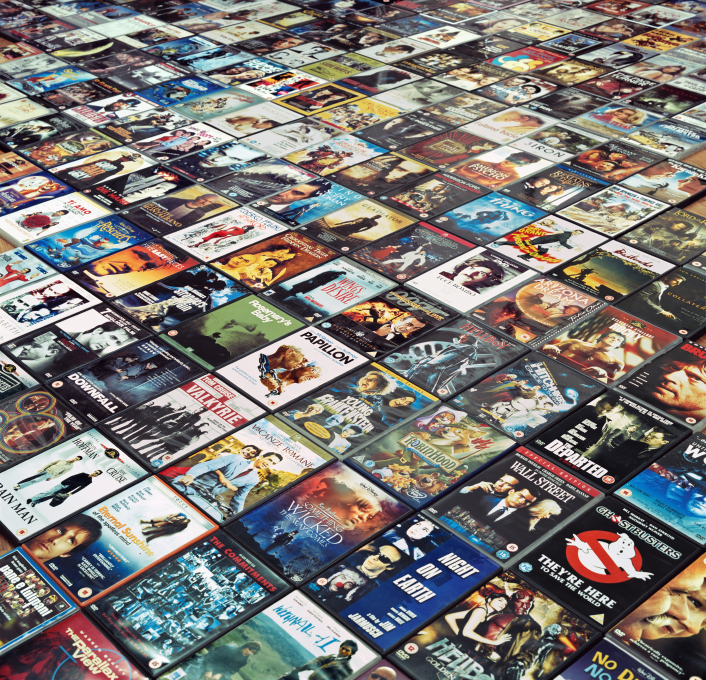