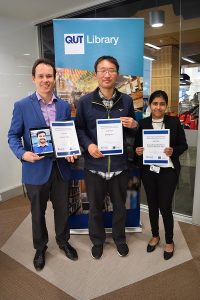 A paper on the challenges of visual place recognition for autonomous vehicles has taken out first place in the SAGE Higher Degree Research Student Publication Prize. Sourav Garg was awarded first prize and $1500 for his article, Semantic-geometric visual place recognition: a new perspective for reconciling opposing views, published in The International Journal of Robotics Research.

QUT Library has partnered with SAGE Publishing since 2014 to offer the SAGE Higher Degree Research Student Publication Prize. The prize is awarded to a Higher Degree Research (HDR) student, who is the lead author on a paper published in a peer reviewed journal with a Q1 or Q2 ranking. Aik Kai Tok, Library Sales Marketing Executive at SAGE Publishing said of their support for the award, “SAGE is globally committed to fostering healthy minds and cultures and to supporting both access to and output of the research community. In addition, SAGE invests time and funds in supporting the research community through sponsored awards and research outputs.”

QUT Library received a record number of entries to the prize this year. A panel of five judges, two academics and three librarians, evaluated the submissions on originality of the research, readability, and contribution of the applicant to the publication. Research Support Manager (Acting), Jennifer Hall, said that the calibre of entrants to the competition was extremely impressive, and that selecting the top three papers was no easy task for the judging panel.

The awards were presented to the winners on 10 September. Sourav Garg, stuck at the airport in Tokyo due to monsoonal weather, attended via Skype. Sourav’s supervisor, Professor Michael Milford, accepted the award on his behalf.

QUT Library would like to thank SAGE for its ongoing sponsorship of the Higher Degree Research Student Publication Prize.

Take some time to destress this exam period