The 2014 Ebola outbreak mobilized groups of researchers across the world to sequence viral genomes and share data providing information crucial to “designing effective diagnostics, vaccines and antibody-based therapies” [1].  However uncertainties around ownership of data, intellectual property rights, patient consent and poor management of data all make access to the source of truth very difficult and often essential data is not available to research community working on epidemics.    QUT PhD candidate Anisa Rowhani-Farid, from the School of Public Health and Social Work, discusses some of these barriers to open data sharing in her guest blog today.

My desire to pursue research in this field began when I was a junior bench scientist some 10 years ago, conducting anti-malarial drug research. I was confronted with the commercial aspect of scientific research.  I learned about the institutional arrangements between industry, academia, the community, or “consumers”.  I also learned about how intellectual property, patents, and funding arrangements play a critical yet limiting role in contributing to the advancement of scientific knowledge.

It became clear to me that scientific research is driven and, more often than not, pressured by the funding available from government and industry, and that these relationships are primarily based on the conception that scientific knowledge is generated through research that views knowledge as a commodity, distributed at a cost to other researchers and most importantly, populations that might need open access to that knowledge.

As I read more, I wondered what happened to all the public money that was spent on health and medical research. I read Chalmers and Glasziou’s (2009) paper on research waste, as well as the series that was published in the Lancet in 2014 called ‘Research: increasing value, reducing waste’.  I learned that around 85% of the world’s spending on health and medical research is wasted per year, and a contributing factor was that the findings of medical studies cannot be reproduced by other researchers and so seemingly successful medical breakthroughs are thus unverifiable [1, 2]. This reproducibility crisis in health and medical research made me think of the way in which scientific knowledge progresses.  I was fascinated by the paper written by John Ioannidis in 2005 where he concluded through simulations that most published findings in the scientific discourse are false and misleading [3, 4].

If most of what is claimed in the scientific literature is false, and if scientists are adopting malpractices because of the pressure to commercialise so-called ‘medical breakthroughs’, then how deep will the cultural change have to be for scientists to conduct high-quality research with integrity, and share all their findings, positive or negative? This question has motivated my doctorate of philosophy. 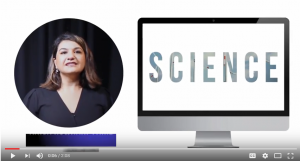 If you’re a researcher, we’d love to hear from you.  Leave a comment below on your data story.

Visit the Love Data Week blog each day for stories, resources and activities and if you would like to join the conversation via Twitter #lovedata18 #qutlibrary