To Sir with Love

QUT Library contains many unique items within our collection. One such piece is so special it is having its own exhibition! From the 20th October 2016 until the 23rd February 2017 Old Government House is playing host to the “To Sir with Love” The Dr Wilton Wood Russell Love Album exhibition. This album, originally created in 1894 by chemistry students, was given to their beloved lecturer, Dr Wilton Wood Russell Love (1861-1933). He was a chemistry lecturer at the Brisbane Technical College on Ann St. This college was the early predecessor of QUT, who knew? 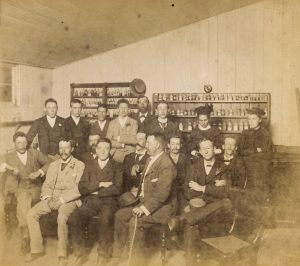 Various photographs of Brisbane are contained within the 19th century album and also include images of the chemistry students and Dr Love. They cover many areas in Queensland including Moreton Island and the Glasshouse Mountains capturing the history of Brisbane from 1862 – 1892 in a beautiful memento. Also included in the album is a gorgeous book plate which contains the signatures of Dr Love’s students.

The album itself has had a bit of a journey before coming to a rest at QUT Library. It was purchased in 1944 by Ensign Borivoj Franko-Filipašić, a US Naval Serviceman, for only £5. Quite a bargain for souvenir with so much Brisbane history! In 1995 he donated the album to QUT Gardens Point Library where it has since been digitised. People from all over Australia and world can now view this beautiful album online and get a peak of QUT’s great-great-grandfather, Brisbane Technical College, and also experience a piece of Queensland’s culture and history.

In 2015, QUT Library’s very own Liaison Librarian, Jennifer Thomas, visited Dr Franko-Filipašić who is now over 90 and resides in Philadelphia in the United States. She was able to interview Dr Franko-Filipašić and capture his own amazing story about Brisbane, “the city that transformed [him] into a Queenslander”. You can view his interviews at QUT Digital Collections.

The exhibition on display at Old Government House will showcase the whole remarkable story behind the Dr Wilton W.R Love Album from 1894 – present day. The contents of the album, the stories of the two great men who were able to call it their own, and its importance to QUT’s history will be revealed. So if you are a history buff, like looking at amazing photographs or even just want to find out more about Dr Love, this exhibition is a must see!