10eHave you ever loved a television program so much that you cried when it ended? There were more than a few sad faces in the library when the season finale of Mad Men rolled around. We even had a tribute magnetic scrabble game on our staff message-board. 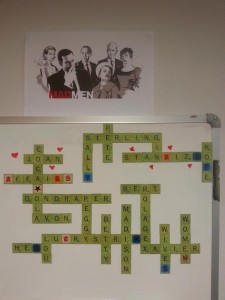 Mad Men ran for 7 seasons and reintroduced the modern world to the fashion, politics, and home-life of 1960’s America. We saw a glimpse of what life was like for the ad-men (and women!) of New York in a sometimes romanticised and sometimes no-holds-barred kind of way. The series grew to be a cultural phenomenon not only for the nostalgic value but for the social commentaries on gender, race equality, and of course, advertising.

Do you want to live in the world of 1960’s Madison Avenue for a little longer? Why not check out some of the awesome titles we have in our collection.

Mad men unbuttoned : a romp through 1960s America / Natasha Vargas-Cooper.
Mad men and philosophy : nothing is as it seems / edited by Rod Carveth and James B. South.
Mid-century ads : advertising from the Mad Men era / edited by Jim Heimann ; introduction by Steven Heller.