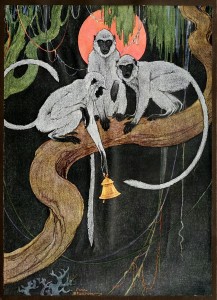 An argosy of fables; a representative selection from the fable literature of every age and land (1921) By Paul Bransom (Public domain via Wikimedia Commons)

The 14th of December is Monkey Day.

Yeah, I know. There’s a day for pretty much everything now. Some of them raise awareness for genuinely important causes, some of them not so much (that’s right, International Talk Like a Pirate Day, I’m looking at you).

The origins of Monkey Day are a bit iffy. Wikipedia tells me it was started in 2000 when an art student scrawled Monkey Day into a friend’s calendar. As the name would suggest, the day is primarily about monkeys, but it also celebrates other (non-human) primates such as apes, lemurs and tarsiers (if you don’t know what a tarsier is look it up, I promise you will not be disappointed).

How does one even celebrate Monkey Day? One of the founders of Monkey Day sends Monkey Day cards to strangers. Others have raised money for primate-related charities with gibbon portrait classes. In 2005, Peter Jackson’s remake of King Kong was released on Monkey Day. If that all seems like a bit too much effort, you could always celebrate with a vaguely monkey-related book or movie from the library. There’s Brian K. Vaughan’s Y: The Last Man, a comic book series in which a mysterious plague kills everything on earth with a Y chromosome, except for an escape artist called Yorick Brown and his pet monkey, Ampersand. If you’re looking for something classic, try out the 16th century Chinese novel, A Journey to the West, which has its roots in Chinese mythology and Taoist and Buddhist philosophy. Or, if you’re after something for the kids, you can’t go wrong with Disney classic, Aladdin.