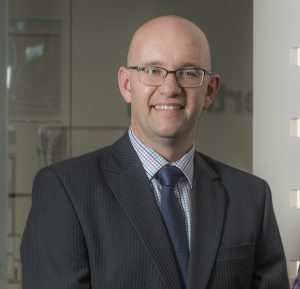 Ben will receive $932,498 to investigate enhancing end-of-life care through a new and holistic regulatory framework. Current regulations are complex and fragmented and can cause distress to patients, families and health professionals.

From extensive research, Professor White and ACHLR colleague Professor Lindy Willmott developed and launched the End of Life Law for Clinicians training program. This is a free program to help medical professionals better understand this changing area of law and deal with situations when they encounter them.

We congratulate Ben and wish him continued success as an ARC Future Fellow.

Ben was a foundation Director of the Australian Centre for Health Law Research for six years (2013-2018). He has published extensively in the area of health law, with a particular focus on end of life decision-making.

Ben’s research has had significant impact leading to changes in law, policy and practice. His work has been adopted by parliaments, courts and tribunals, and law reform commissions and has also influenced State and national end-of-life policy and prompted changes to clinical education in universities, hospitals and health departments.