My involvement with Queensland University of Technology (QUT), is since 2008. I, along with other three Nepalese colleagues participated at the Pandemic Disaster Preparedness Training held in Brisbane, Australia from 24 August to 29 November 2008. The training was funded by the Australia Leadership Awards and hosted by the QUT. We had ample opportunity to learn the Professor Gerry FitzGerald and other theoretical and practical aspects of disaster risk reduction from resource persons. During the course we also visited several government and nongovernment facilities in different cities of Australia.

After the training, I returned back to Nepal and did the following things:

In 2011, I completed Post Doctorate on “Disaster Risk Reduction: Policy Implications for Nepal, Australia and Beyond” from the QUT, Brisbane, Australia in 2011 under the Endeavor Award Fellowship. After the Post Doctorate degree my accomplishments were as following:

The above photo was taken during the lobbying of the Disaster Management Bill. Finally, the Bill was endorsed by the Parliament on 10 November 2017. Now, Nepal has Disaster Risk Reduction and Management Act, 2017. 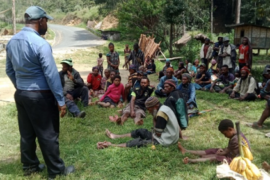