Hey there, I’m Janene and I did a semester overseas in the heart of New York City at Fordham University! I can truly attest to their University’s slogan, “New York is my campus, Fordham is my school”. I learned so much both inside and outside the classroom and I would do it all over again if I could.

Coming from relatively small and quieter areas like Brisbane and Singapore, the environment in New York was definitely a stark contrast in comparison to what I was used to. New York is not only as huge as a state, but everything in it is massive too! Everywhere you go, skyscrapers will be towering above you. The cultural attractions are never ending. From the Brooklyn bridge to the MET, you will constantly be stimulated. I always had my camera at the ready whenever I stepped out, trying to capture as much as I could. I was amazed by the diversity and colour of New York City. A single subway ride alone brings multiple strange encounters, like half nude travellers and buskers with bizarre talents. I love how you can never look or be too crazy, there’s always someone who will top you — and the best part is, no one cares!

While I loved New York, there were also some aspects that I struggled with, one of them being the tipping culture. It was really stressful having to figure out how much to tip after every meal and it’s safe to say that my calculation skills have improved from my time spent there. Another thing was having strangers come up to you and starting a conversation. It was startling the first few times but as time went on, I learned to embrace it.

Those conversations were sometimes a pleasant surprise and it was interesting to hear about how different people live their lives. 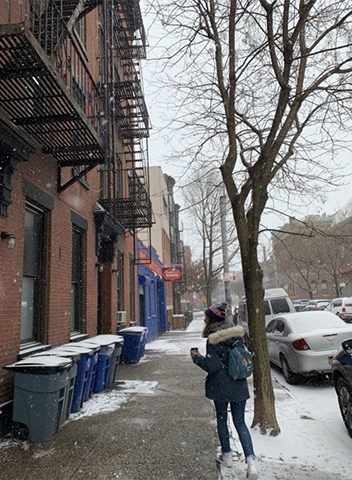 I wanted to experience the full college campus life, so I signed up and joined everything I could — the women’s rugby club, career fairs, volunteering at a soup kitchen, attending basketball games and more. I’ve made many unexpected friendships through these events and although it was scary throwing myself into these unfamiliar situations, my fears soon faded away as I got to know more people.

In all honesty, it was a challenge to keep up with the grading system in Fordham. Instead of QUT’s usual system whereby our grades would comprise mainly of two huge assignments, Fordham breaks down their assignments into smaller percentages. They are peppered throughout the semester, some courses even having one assignment per week. As an exchange student, I found it hard to keep up with so many assignments and readings while trying to travel the States.

Not only was the grading system in Fordham vastly different, but classes were also held differently. They combined lectures and tutorials into singular smaller classes to facilitate better discussions, enabling students to feel more comfortable in sharing our honest opinions. The thought-provoking classroom conversations always gave me something to think about afterwards. It was mind opening to not only learn about the media industry in the media capital of the world, but to understand, see and experience the socio-economic and social issues in the city itself. The diverse class demographics also enabled differing views to be heard on one topic. I really enjoyed all my classes at Fordham and I was genuinely excited for each one.

New York is truly the city that never sleeps. There is always something to do, you just have to look for it — Google and Facebook Events were my best friends. Since I stayed in the Lincoln Centre campus, I was able to explore the city on a whim. Being in central Manhattan, we were just a stone’s throw away from everything.

During the week, my friends and I would search for events happening that night and head down after class to catch a comedy club or a late night bite at a diner to end off the day. Over the weekends, we might watch an ice hockey game, a Broadway show in Time Square or even go ice skating at Bryant Park. There’s so much to see in New York and every borough has its own flavour to offer; 6 months will not be enough for you. There were so many instances when we were strolling aimlessly around an area, just to stumble across a local art exhibition or a boutique cinema.

Never take no for an answer. There were a lot of obstacles I faced during the exchange application process. From visa to accommodation and even adjusting my QUT study plan so that I was eligible for exchange. There was never a smooth part. It took multiple phone calls, meetings and emails to the government, QUT and Fordham to make it possible. I remember having to stay up till 2 am in the morning to request enrollment into the classes I needed, as they were unfortunately full. I had to work on New York time as that was the only time I would be able to get a prompt reply. There will be many instances when you too, will hit a roadblock but there is always a way around it. Not only did I gain from my experience in New York, but I also learned a lot from the application process alone. It was tough having to handle that on top of my personal commitments and school work but I am glad that I did not give up.

If I were to sum up my experience as a whole, I would say that it was mind openig. Experiencing New York and having numerous discussions with individuals from various countries and backgrounds provided me with new perspectives. I never realised how much I didn’t know until I was there. I learned so much within the short time span that I had in New York and I would not trade that experience for anything. I enjoyed all my classes, the conversations I had with strangers on the subway and exploring various nooks of the city.

Still pondering on the idea of going on exchange? My advice — Just go for it. The feeling of fear as you enter into a foriegn country will soon diminish overtime as you make new friends and learn to assimilate into New York. You will come back a new person, your mind broadened and a whole lot braver! 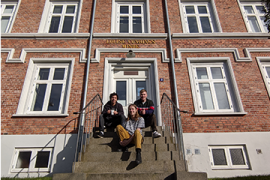