An Experience that Made Saying Goodbye so Hard

Semester 1, 2020
Bachelor of Laws (Honours) / Bachelor of Media and Communication

In the first semester of my fourth year of university, I studied abroad at the University of South Carolina (USC) in Columbia, South Carolina. I knew a few people who had gone to USC, and after hearing about their experiences, I knew that it was the perfect choice for me.

I flew out to Columbia on January 9th 2020, after many stressful events including having to fly to Melbourne for my visa appointment. Upon arrival, after my 20 hour trip, I was placed in the wrong room and had to spend the night in a free room next door while they sorted out my new accommodation. The next day, I was re-allocated to a room in Green Quad. I would highly recommend staying in one of the Quads (Green, South or East) if you can, as you get your own (albeit, tiny) room, and you share a kitchen and two bathrooms between four people. However, it was pretty expensive ($4,595 USD for the semester), so that’s something to consider. Originally, I had only two roommates from Pennsylvania and South Carolina, but after three weeks the Housing Office were kind enough to allow my friend from New Zealand to move in. I was really lucky with my roommates as we all got along really well, but many of my friends didn’t see theirs often!

Before I left for exchange, I signed up to the USC Global Gamecock Guide program, which matches each incoming exchange student with a USC student who has also studied abroad. I was matched with Katie, a girl from New York who had studied abroad in Florence. She quickly became one of my best friends and my experience on exchange would have been completely different if I hadn’t met her. I would highly recommend signing up to this program! I was one of only two Australian girls on exchange at USC that semester, and the other girl had already been there for the fall semester. However, I’m actually glad that there weren’t more Australians as I quickly became friends with not only Americans but people from all over the world including New Zealand, England, Scotland, and Finland.

I was lucky to be able to use my law electives while I was on exchange, and I chose to take Criminal Procedure, American National Government, Voices of America and University 101. They were all really enjoyable and extremely easy compared to classes at QUT. I also found the class environment to be much friendlier and more laid back than at home. I would highly recommend anyone going on exchange at USC to take University 101 – it’s the easiest class imaginable (with 25% of the grade being attendance) and I don’t think they give anyone lower than an A!

I would also encourage all exchange students to sign up to the Mountaineering and Whitewater Rafting Club. It’s $60 USD for the whole semester and you can go on as many trips as you want throughout the semester, with numerous trips every weekend. I signed up with one of my friends, and we spent a weekend at Grayson Highlands State Park in Virginia. It was absolutely freezing but one of the most memorable experiences that I had on exchange!

Every weekend there was something happening at USC, so we planned to do most of our travel at the end of the semester (R.I.P) and we spent our weekends at USC immersing ourselves in college life. However, aside from Virginia, we also found time to travel to North Carolina, Tennessee, Georgia, and lastly, Puerto Rico for Spring Break. I’m so glad we spent our semester this way as we had so much fun in Columbia that we actually didn’t look forward to leaving campus for a weekend!

In terms of living in Columbia – it is the capital city of South Carolina, but it feels like a small town with the university at the centre. It definitely isn’t the safest city, but I honestly never felt unsafe as I was always surrounded mostly by other college students the same age. It is such a fun city and everyone has the same mentality of wanting to make the most of their college years (or semester, in our case). The only thing that I can fault USC for is the fact that there isn’t a grocery store on campus. It’s a bit of a hike to Food Lion, so my friends and I would go on a Sunday to buy everything that we needed for the week, or we would drive there with one of our American friends. Restaurants that I would recommend include Publico ($2 tacos on Tuesday’s), Tios Mexican Café, Menkoi Ramen House, Village Idiot, Tsunami, and Mediterranean Tea Room. Soda City is a really fun market on Saturday mornings that have heaps of amazing food stalls! Additionally, sporting events are free for all students so if you’re there in the Spring semester, I would definitely recommend attending the basketball games (especially for the Women’s basketball team as they’re the best in the SEC)!

Almost immediately, Columbia truly felt like my new home and after 2.5 months, I wanted to stay there forever. While the exchange ended very abruptly (with one day to pack up my new life), I returned to Brisbane with friends from all over the world and unforgettable memories and experiences from the best few months of my life. 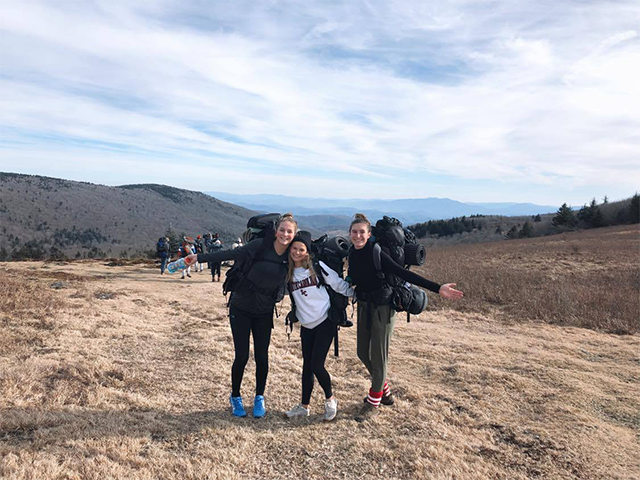 I’m so happy to have had an experience that made saying goodbye so hard. I can’t think of a better place to study abroad than South Carolina!

Learn more about the University of South Carolina