One of my most thankful decisions prior to leaving for exchange, was reaching out to the other QUT student selected to exchange at ASU. This provided us both with a sense of security, comfort and friendship leading up to the nervous departure, throughout the ups and downs of the exchange, and now to a forever long friendship awaiting our return to Australia. Prior to orientation week at ASU, myself and this other student met at Sydney International Airport before embarking on a trip through California, to set the scene for our USA exchange.

Arriving in Phoenix, Arizona a week later, was one of the hottest, most dry climates I have ever stepped out of a plane into. I was thankful that Arizona has taught me how to better increase my water consumption! It was imperative, that’s for sure! It was pretty important that we lived right across from campus for the first month, during the hottest month of the year.

Two days of orientation run by Arizona State University was an amazing experience and very well run! It involved an opening ceremony with cultural performances, tours around the campus, seminars to introduce the culture, schooling requirements and interesting things to know. This gave us ample opportunity to meet the new exchange students. The most enjoyable orientation event was the opening Pep Rally for the international and first year students in the main football stadium, joined by the cheer leading team, marching band, dance performances and speakers.

The exchange team also included a trio to the local outdoor shopping marketplace, where we were shown the target for any apartment or grocery goods! Other welcome events were also held during the week. The first month was really well spent amongst all the different apartment complex with pools (which is all of them), enjoyed by good company, music, drinks and large outdoor TV screens showing sporting matches.

The timetabling for American classes is somewhat frustrating, yet also rewarding, in the sense that each subject runs twice – three times a week i.e. Monday, Tuesday, Friday OR Tuesday & Thursday. The positives of this is that you are continually seeing your lecturers and classmates, as well as remembering content over two days, rather than weekly as we have at QUT. The downside to this however, meant that missing class was a rather large issue for missing class content. To further this, lectures AREN’T RECORDED! As annoying as this was initially, it meant that I was more engaged in class and interested in my course content, as there was little opportunity to catch up if class was missed. It is my strong advice that students do not choose to have any classes on Friday’s, in order to ensure 3 day weekends for travel and no missed classes!

An adjustment however was the assessment system. Rather than QUT’s system of 3-4 major assignments/exams every month or so throughout the semester worth 20-50% each in my experience, the American system follows weekly tasks and assignments ranging from 1-10% weighting. Easy marks were given for; attendance, mid class quiz, end of class quiz, online quizzes and small response submissions. The exams therefore were usually of a low weighting of 20%. From speaking to all of my friends, it was unlikely that anyone finished with a grade below an A.

One of the greatest challenges I had was the expectations to organize your own travel around the city for excursions, field trips and field studies for assignments. Phoenix is not a public transport friendly city, which meant expensive Ubers or ensuring you made friends in your class who would drive you to these places. Almost every local did have a car, and so it was not too much trouble.

The enormous ASU gym facilities were a main part of campus life. Many students, including myself, even take a sport class each week to go towards school credit! This ranged from weightlifting, yoga, boot-camp, dance, swimming, volleyball, glow cycles and the list goes on! Not only were credit-based classes offered, the endless range of FREE gym classes outside of class time was incredible. I was sure to make use of these free classes.

Life on campus was really great! There was never a day without club tents, free giveaways, flyers being handed out, live music and game day advertising and merch. The giveaway’s were certainly a highlight, with myself and two friends receiving a free NEW pair of Adidas original shoes on campus! I also could not keep count of the number of free t-shirts accrued on my exchange!

Another part of campus life that surprised me was the level of effort put into student events and festivals. The Adidas festival with live performances, cultural festivals with hot air balloons, Sunday service by KANYE, and many more provided such amazing highlights.

Accommodation and costs of living

At Arizona State, majority of the housing is off campus. All of the off-campus housing are mainly one street away from campus, which you can see from your window. This meant we were able to easily walk to and from campus, as well as other apartment complexes without Ubers or relying on the poor public transport in Tempe. Personally, my walk to campus was beautiful as I diverted through ‘palm walk’ . 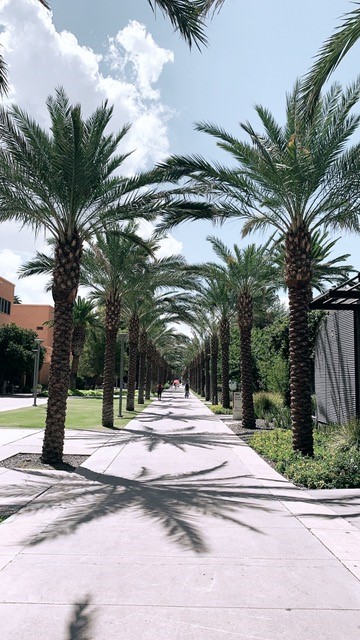 Much of the apartment complexes were similar in price, however I learnt that there were indeed much cheaper options available. Much of those similar however all had very very similar facilities including; outdoor pools, gym’s, tanning beds, pool tables, common areas and study nooks. I would not recommend living in on-campus housing for the fact that it is a dry alcohol campus.

Party Life – Personally one of the most disappointing parts of my exchange was how much of an effect being <21 would be in American College. To my surprise, Arizona State University no longer has their row of frat and sorority houses as you see in movies. This meant that the parties were not what I expected. As a result, most international students preferred to spend their weekend nights at the clubs rather than parties. I would recommend attending Arizona State as a 21-year-old. Nevertheless, there are AMPLE parties, pool sessions and traveling opportunities to go around. I can say for sure that I was never bored on my weekends!

Travel – My group of exchange students included Australians, British, Austrians, Canadians, Irish and some American locals. A large group meant that travelling was inexpensive to cover the costs for car hire and accommodation! The best finding that we made when travelling, was the car rental company ‘TURO’, which was undoubtedly the cheapest for under 25 year old’s. I recommend making the effort to become close with fellow exchange students for this reason, among many! My travels included; Grand Canyon and Tombstone (Arizona), Bryce and Zion National Parks (Utah), Pagosa Springs Ski Fields (Colorado), Vegas (Nevada) and Orlando (Florida). I was not let down by any of my travel experiences and would love to provide further recommendations!

Location – Due to the poor public transport, I highly recommend researching your closest supermarket before securing your accommodation. For the first few months, I relied on grocery delivery which is not the most economical option. Many of my friends shared Ubers to and from the supermarket, requested a lift from a local or walked if they were close enough!