In semester 2 of 2019 I was lucky enough to go on exchange to Canada. When I found out that my application to study at the University of Ottawa had been accepted, I immediately (literally that same day) began planning my accommodation and travel plans for what would become the best 6 months of my life!

Ottawa is the capital of Canada, located in eastern Canada in the province of Ontario. While it is a fairly small city, it has 3 large universities meaning there is plenty of student life and things to do. One of the reasons I chose to study in Ottawa was its central location in Canada. I planned on travelling to several other cities during and after the school term, and Ottawa gave me the opportunity to do this. Ottawa was small enough that it was easy to walk to most areas or catch public transport when it got a bit colder.

I chose to study four subjects in the Common Law Faculty at uOttawa. Law cohorts were a lot smaller than at QUT with most of the units I undertook having less than 30 people enrolled. Each of my subjects had one three-hour seminar once a week. I was lucky enough to have three of my units scheduled on a Monday and the other one on a Tuesday morning. While Mondays were tough, this meant I was finished uni by midday on a Tuesday.

A few things to keep in mind are that in most units, attendance is compulsory and contributes to your final grade. At uOttawa, final exams can also be worth up to 90 – 100% of your final grade (three of my units had 90% final exams!!).

Finding accommodation in Ottawa was probably the most challenging thing I came across while preparing for exchange. In previous years, most students on exchange have chosen to live on campus in a building mostly for international students. However, during the semester I was at uOttawa, that building was unfortunately under renovations. This meant that accommodation on campus was very competitive and mostly awarded to first-year students.

Off-campus accommodation was not much easier to find. Unfortunately, most rental agreements were for 6 – 12 months. However, I was fortunate to find an apartment with two lovely Canadian girls. While at first, I was super nervous about living with two complete strangers, off-campus, and a decent way from the uni, it actually turned out to be better than I ever could have expected. All of the exchange students I met were also living off-campus which meant we could spend time at each other’s houses and apartments cooking, watching movies, and hanging out. I definitely got out and saw a lot more of Ottawa than I would have had I been living on campus.

During my exchange at uOttawa, the uni organised many events for students in the exchange program. These included movie and games nights and organised dinners which were a great way to meet other international students. Sporting events such as the weekly football matches were also a great way to get involved with the school spirit.

One of the best things I did while on exchange was to join an intermural social sporting team. I and a few other exchange students who I had met on orientation day decided to get together a flag-football (like Canadian gridiron) team of other international students. While we lost every game we played, we definitely had the most enthusiasm and it was a great way to make 20 new friends from all across the world.

The exchange office at uOttawa organised a number of trips to different places in Canada throughout the semester. My favourite was a trip to Parc Omega, a safari park in Quebec where we were able to see and feed a number of Canadian animals such as deer, wolves, bears, and even a moose.

As Ottawa is located in the east, it can get down to -30 degrees in the winter. It was tempting to stay inside where it was warm, but the best advice I can give is to embrace the cold and get out and about. There are still plenty of things to do in the winter, and as long as you have a warm coat, it’s not as bad as it sounds! All of the buildings at uni were heated, and most were connected so you didn’t have to go outside. There were many op-shops or discount stores that sold cheap but good winter coats or uOttawa had a free-store where students could get free second-hand clothing. I got my coat from the free-store and it was super warm!

Exchange was honestly one of the best experiences I have been lucky enough to have.

It has provided me with so many memories and opportunities that would not have been possible had I stayed in Brisbane and has allowed me to meet some awesome people from all over the world who I now call close friends. If you are even considering exchange, do it! You definitely won’t regret it.

Find out more about the University of Ottawa 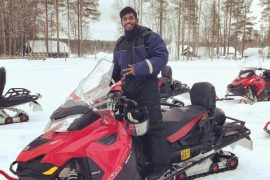 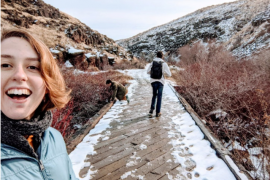 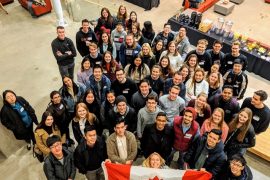 By River and Sea Rise: My Time in Canada