The holiday season is an interesting time in Japan. Although they still celebrate Christmas and New Years in Japan, the way in which they are celebrated is the opposite to Australia. There are also some odd and humorous quirks that Japan has added to these holidays which make them refreshingly different.

The most obvious difference between the way in which these holidays are celebrated is their level of importance. In Japan, New Years is a far more important time of year then Christmas. The New Year has a deeper cultural significance for the Japanese people and it is a time that you spend with family. Subsequently, on New Year’s Day these family’s will go to a temple together to remove their sins and start the year afresh.

Christmas, on the other hand, is a holiday that you often spend with friends. Most will provide gifts for friends and family but it is not considered a significant holiday for most people in Japan (Ritsumeikan even made me go to uni on Christmas). So, as you can tell this is quite the opposite from Australia where most people will spend time with family on Christmas and friends on New Year’s.

There’s also quite an interesting quirk to Christmas in Japan that I and a lot of foreigners found quite funny when we arrived here. But, to this oddity any semblance of justice we have to go back and understand the history of how this custom came to be.

In fact, the demand for KFC’s chicken is so high that you often have to order it weeks in advance to even get a single bucket. Other chains such as MOS Burger and Family Mart have taken advantage of this surplus in demand by also providing their own Christmas fried chicken.

Well, there you have it, some of Japan’s odd little cultural differences on full display during the holiday season. It’s a nice change from Australia and gives these holidays an interesting and unexpected twist. 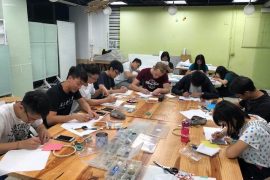 My learning experiences in Tainan, Taiwan

My Irish Pot of Gold: Part 2

My Irish Pot of Gold: Part 1