I’m now one week away from travelling back to Australia and I realise that I’ve picked up a lot of great advice in regards to travelling while studying in the UK. Take it from someone who spent her birthday in Paris, Christmas in Amsterdam and New Year’s in Edinburgh, I have done my fair share of travelling, and I have the pen collection to prove it:

So, here are some of the top travel tips that I have learned so far.

You can pick up one of these magical cards from the Leeds train station for £30 to get around 50% off all train trips within the UK. Even if you don’t think you’ll be travelling much by train, get one just in case because the savings on two return trips to London pretty much make up the £30.

Coming from the girl who missed the final train of the night because of a delayed flight, there is always a way to get home. Just hop onto the Trainline app and find the next train home instantly from wherever you are.

Ticket prices go up literally every day. Once you know where you want to travel, book straight away. A return trip from London ranges from £20 if you book a month or two in advance, whereas the trip becomes £80 if you book a week in advance.

Skyscanner shows you prices of every airline for the dates and locations that you specify. The website is the best way to save money on flights.

People (including myself) have had some miserable experiences on Ryanair with it being uncomfortable, flights being overbooked and the experience, in general, often being unpleasant. It’s best to avoid them if possible, but hey, if it’s cheap I won’t stop you.

I flew for 5 hours with Jet2 from Tenerife to Leeds and the flight was extremely comfortable while also being super cheap.

If you’re a student in the UK from September until January, you’ll most likely begin feeling chilly around late November. Good thing is that uni finishes early December, so what 3 friends and I did was take a trip to sunny Tenerife in the Canary Islands. It was 23° Celcius in mid-December in Tenerife which happened to be extremely warm compared to the 1° weather and snow in Leeds. The whole 5-day trip with flights and accommodation was only around $200 AUD in this beautiful hotel:

The only way I reserved a 4-star hotel room for 4 people and 4 nights in Tenerife for $90 AUD each was through Expedia. The hotel we stayed in was the Santa Barabara Golf and Ocean Resort in Tenerife South if you’re interested!

I did 5 free 2-hour tours by the company Sandemans. I highly recommend you check them out because once the tour is over you just pay them what you personally think the tour was worth, such as £5, £10, or if you have no money, just slowly walk away without making eye contact with the tour guide.

These three companies have sent me to places such as Snowdonia in Wales, Lake District, Whitby and more for under £30! I even scored a trip to York for £3 from the Leeds Union. They are the best way to explore the UK on the weekends during term time with a group of like-minded students. I definitely recommend going on these small trips if you want to see views such as these:

Travelling around the UK and Europe has been an incredible amount of fun and I’m truly sad that it’s almost over. But, this means that it’s almost your turn to have this amazing adventure! So, I hope my tips have helped calm your nerves and I hope you have an experience as fulfilling as mine. 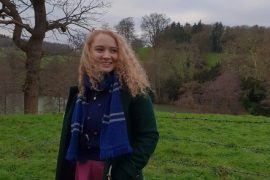