Canada – some tips on how to fit in

Moving to a different country obviously means having to adjust to the different culture. Even similar countries like Canada and Australia vary quite considerably. Things we say or do, or our tastes, in general, are strange to them (as many Canadians have pointed out), and vice versa.

They live up to their stereotypes –

As always, email me at emma.blatz@ucalgary.ca is you have specific questions.

My winter experience in Canada 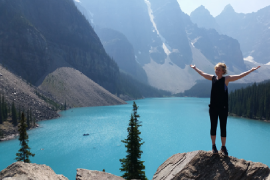 On top of the world in Canada