On Saturday 25 May, a group of enthusiastic young ‘designers’ joined us at The Cube to learn about digital design and to workshop ideas for The Living Reef digital project.

This fast-paced workshop facilitated by Scott Millar and the team from BOP Industries saw the participants rapidly evaluate the elements that go into a good digital product. Students looked at current game examples and tested several of The Cube’s interactive projects. They got insights from a STEM Schools ambassador, and The Cube Studio team unpacked an example using the new ‘predator-prey’ activity showing how it is being developed. 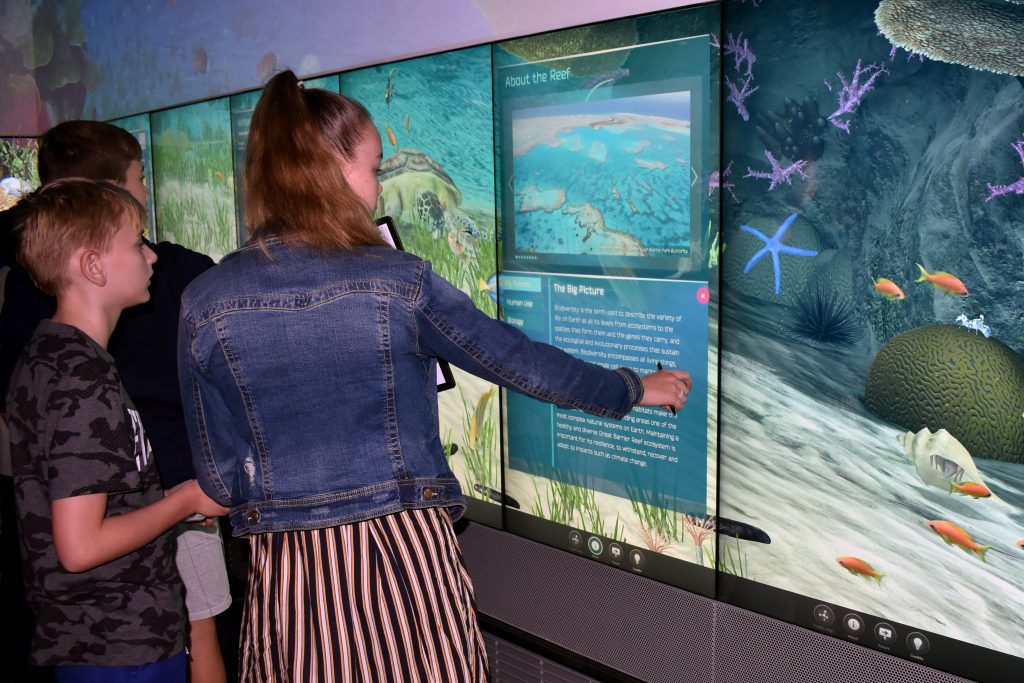 We were very fortunate to have a number of special guests join us for the day! Leanne Kemp Queensland’s Chief Entrepreneur and Yasmin Grigaliunas Founder of World’s Biggest Garage sale inspired students with their start-up stories. QUT coral researcher Brett Lewis shared his knowledge on capturing the movements of coral and how research can be presented using tools such as augmented reality.

The next step was to start researching topics relevant to the Great Barrier Reef. The students covered lots of ground identifying issues such as overfishing, tourism, coral bleaching, water quality, and micro-plastics to name a few. 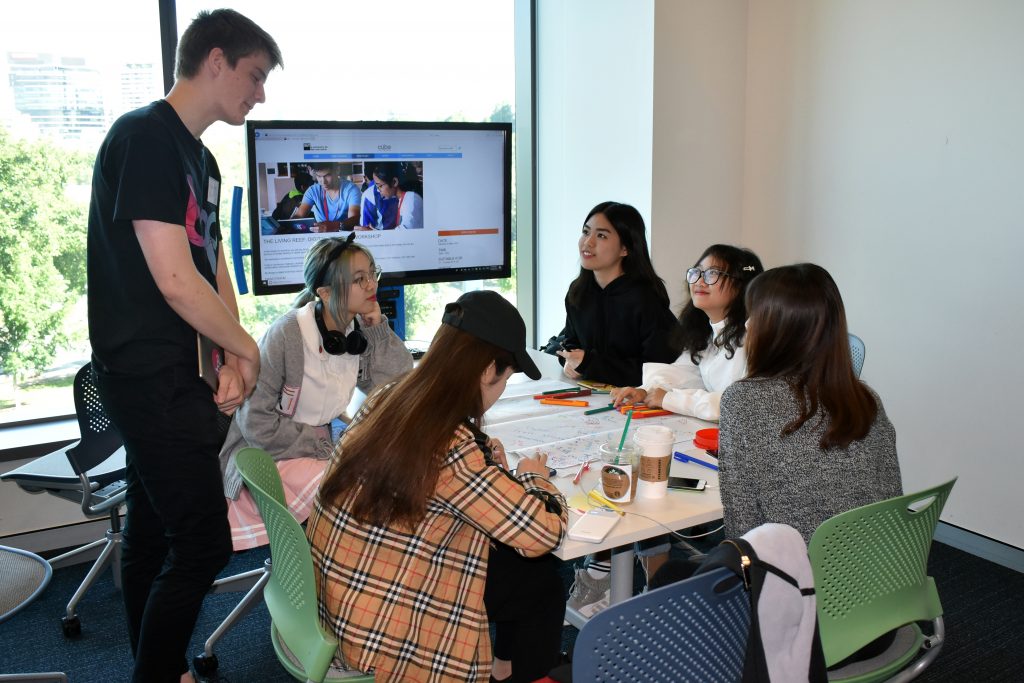 Our young designers looked at team diversity using a ‘hackers, hipsters and hustlers’ framework. They worked in groups to transform their research topics into a game idea working on large sheets of paper to provide an outline of the concept and functionality. All of the teams did an amazing job, and each group wrapped-up their day by ‘pitching’ their game to their peers.

One team conceptualized a game with rubbish falling into the reef that had to be collected by a giant claw! They used The Cube’s screens to modify information for older and younger audiences. 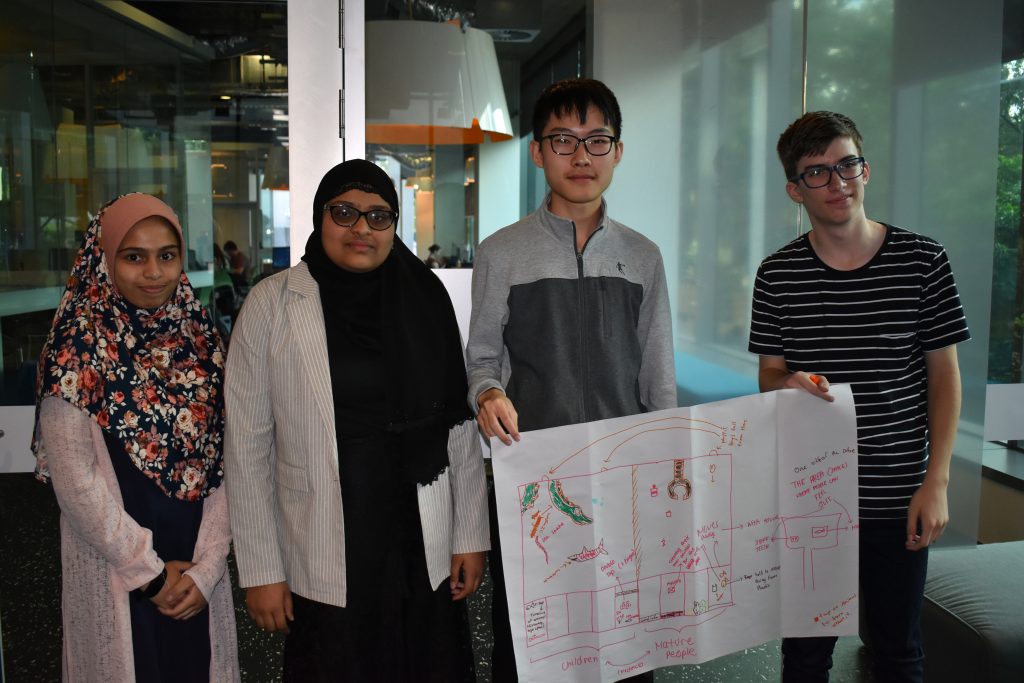 This group of two also explored the issue of rubbish highlighting the educational aspects of the game, showing the effects of eating rubbish and the resulting number of annual marine life deaths. 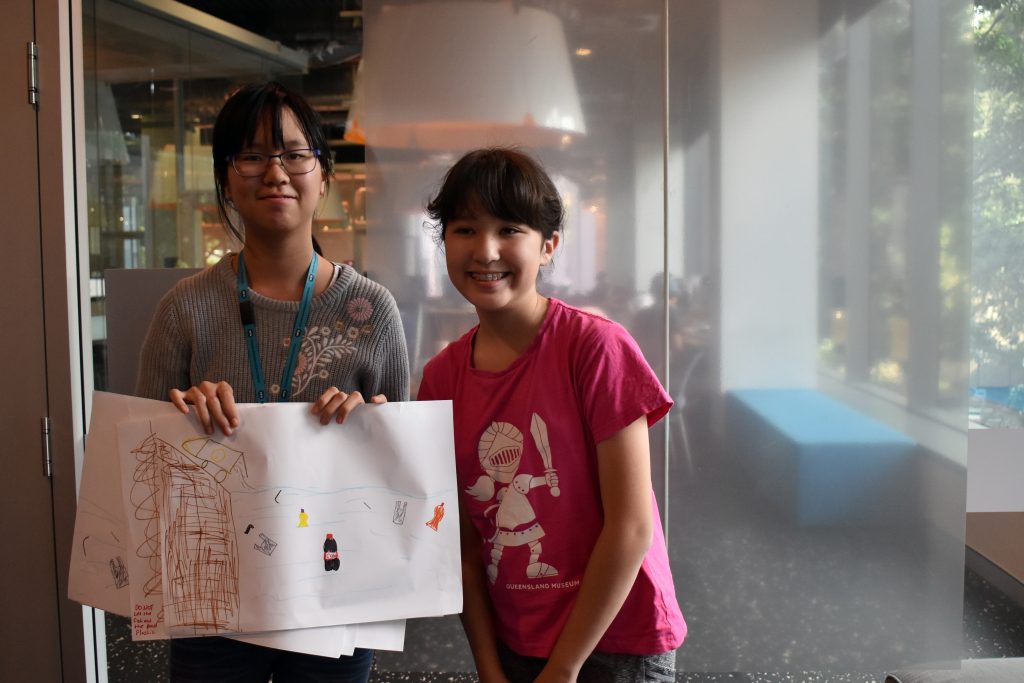 The next team highlighted that micro-plastics can kill! The game was divided into three levels, with players swiping the screen to ensure no marine life eats plastic. Players also learned facts about micro-plastics such as how much we plastic we might eat from ocean to plate. 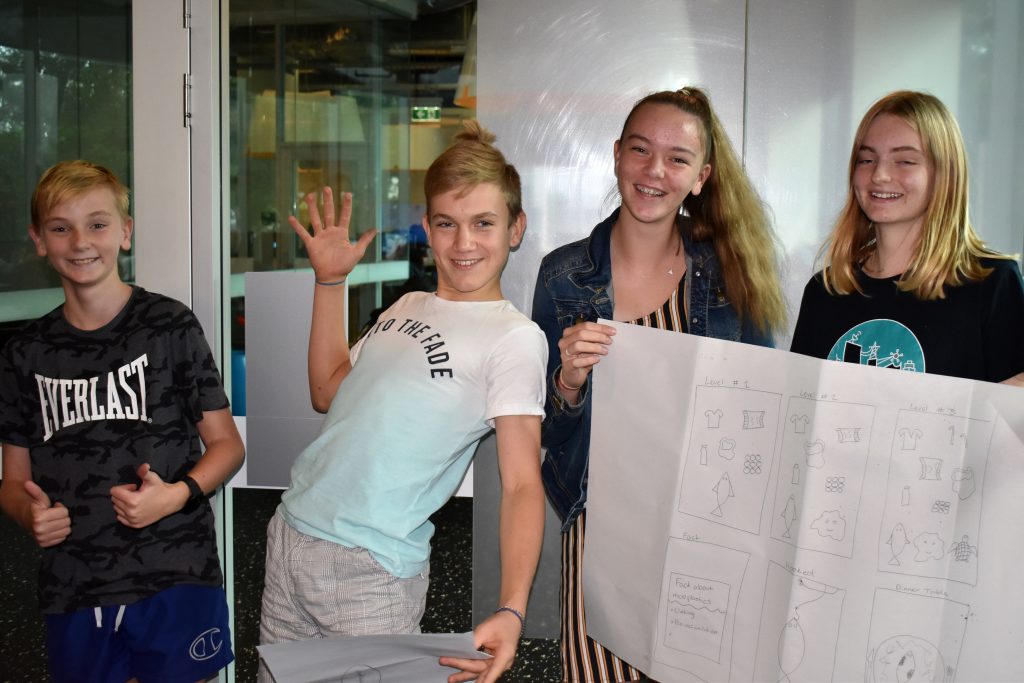 This team’s game brought a boat load of tourists tossing rubbish into the ocean. When a fish dies, the player needs to use money to buy new fish, but running out of cash also means game over! 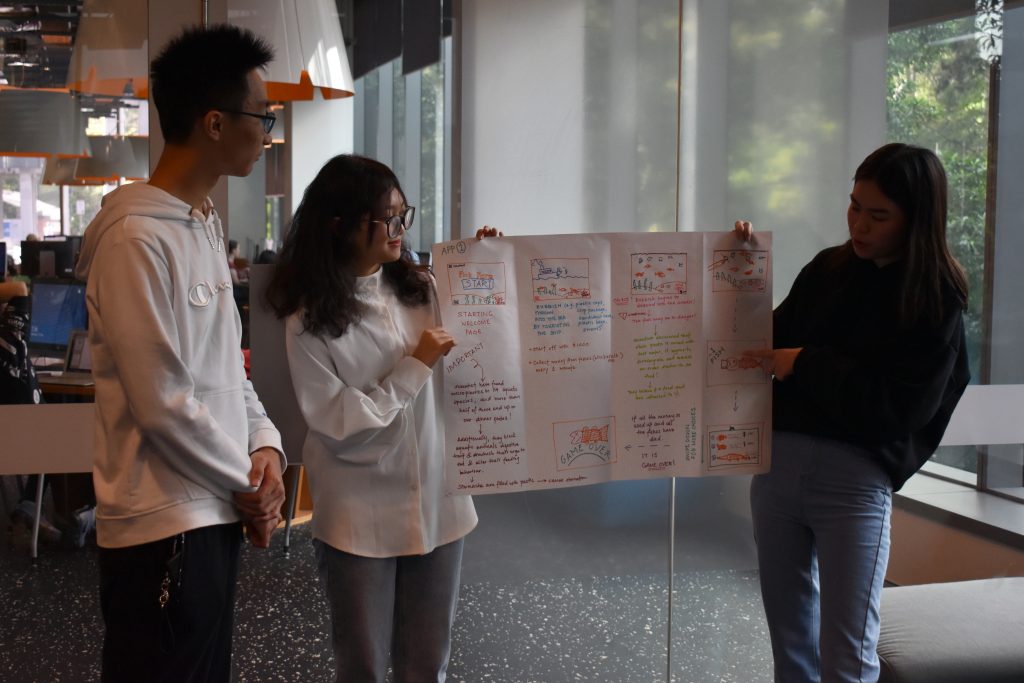 This team pitched ‘Micro-plastics peril’ in which you play as a diver collecting plastics! Players then have to work their way through questions, the game shows you what you animals you saved and which questions were answered correctly. 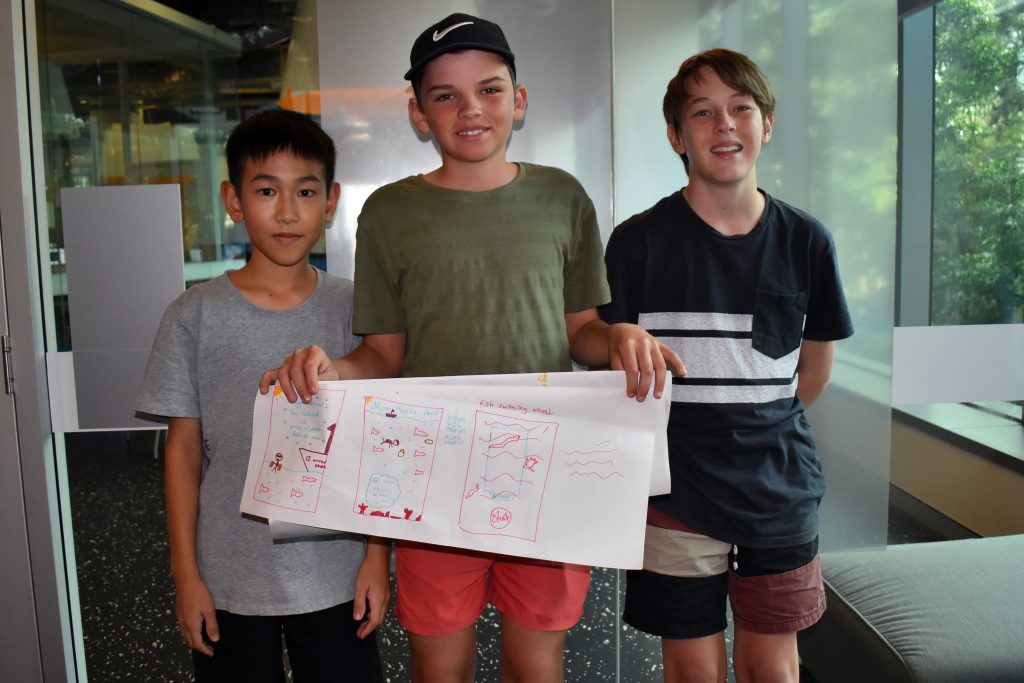 The BOP Industries team also pitched ‘Reef Warriors’ to grow baby coral into an adult and share this new coral into the project. The Cube team’s ‘Shark Cleaner’ activity allowed players to use a cleaner fish to help clean the shark’s teeth, a novel approach to illustrating symbiotic relationships! 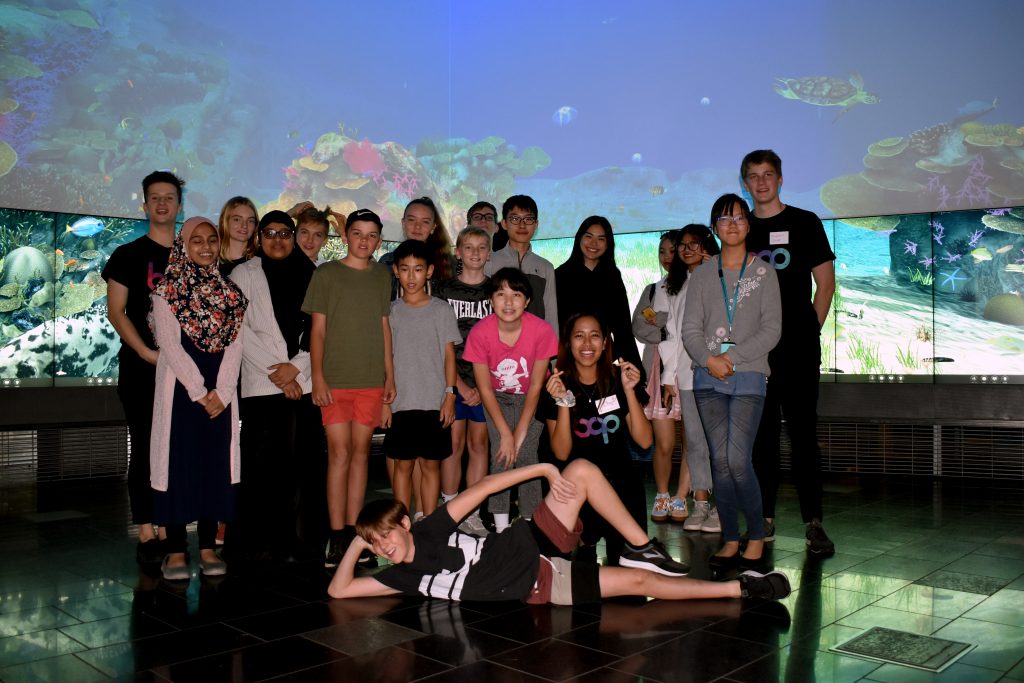 A big thanks to everyone that took part in the workshop. It was fantastic to see the students using design thinking processes to rapidly generate ideas and contribute such great game options to The Living Reef. Take a look at the Digital designer workshop video.