Learn the basics of coding through play

As our world rapidly changes with the influence of technology touching every aspect of our lives, it’s vital that children are equipped with the necessary skills to navigate a dynamic and ever-evolving future. In Queensland, the Department of Education and Training’s #codingcounts initiative places great emphasis on coding and robotics technologies, introducing these learning areas into the curriculum to ensure all students have the opportunity and support to become digital creators and innovators of tomorrow.

The Cube’s most recent project, Code-A-Bot, aims to teach users the fundamentals of coding in a highly interactive and immersive digital game, which also educates users on recycling and robotics. Cube Studio Manager, Sean Druitt and Digital Interactive Designer, Simon Harrison talk about the journey to develop Code-A-Bot, and the opportunities it provides for students to learn about the fundamentals of coding.

How did the idea for Code-A-Bot come about?

When the Coding Counts report was released we wanted to provide schools with a tool that would assist in building the knowledge of logic based coding in a fun and engaging way. It was also a great opportunity to further promote QUT’s extensive robotics initiatives through areas such as the Australian Centre for Robotic Vision (ARCV).

What were some key aspects of coding that you really wanted to educate users on, when developing the project?

We wanted to eliminate the layer of fear some people have when hearing about coding. There is a stigma that coding is only accessible to maths wizards. Although maths competency assists coders diving into deeper systems, it isn’t fundamental to the initial learning experiences based around the logic of coding. We wanted to create a system that doesn’t look too daunting on the surface and encourages users to dive into the project but with layered complexity for experienced users who want to optimise results. At its most basic level, Code-A-Bot provides a platform where robots can be instructed to complete basic tasks, all in a perfectly safe environment where iteration and experimentation are encouraged.

Could you explain a little about the initial ideation process and the refinement of the project? And what inspired you to base the project around the future of recycling plants?

We wanted to create or own basic tile-based coding language inspired by Scratch, which was already being widely taught through schools. We also knew that we wanted it to be robots because, well, robots are cool! We bounced around a lot of ideas for what we could have the robots doing and nothing felt quite right but when we considered a factory environment and thought of recycling plants, everything seemed to quickly fall into place and plus recycling is a hot topic in today’s climate (pun intended!). Everyone understands the endeavour of trying to be better recyclers so new users to the project immediately grasp the concept. Recycling also gave us an opportunity to further educate and encourage conversations around recycling initiatives and our impact on the world around us.

How does the program complement/add value to the Digital Technologies curriculum taught as part of the STEM program in schools?

The Cube provides schools with an extensive digital learning space. Through Code-A-Bot, you can see up to 20 users coding at once and assess their progress at a glance rather than a teacher having to go from desk to desk. Code-A-Bot is also a collaborative experience which encourages all of the users on each wall to work together to achieve the highest collective recycling efficiency possible. This is in contrast to the typical coding experience of one coder per device. 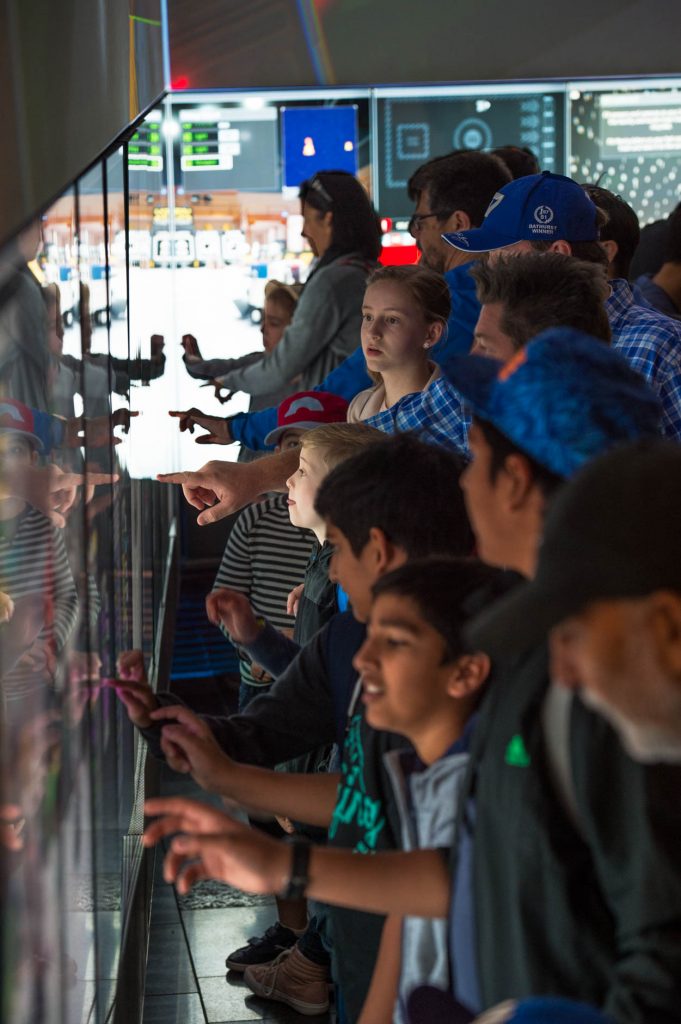 Thanks Sean and Simon!

Code-A-Bot is an interactive digital game putting you in charge of programming robot workers to collect and sort rubbish, improving the overall efficiency of a waste recycling plant. Using The Cube’s digital touch screens, robots can be coded to move, sense, and collect or distribute rubbish around the facility and into the correct bins. You can also work together with other players and their robots to improve efficiencies and achieve the best results for DERP. Check the website for screening details.