Part Two of Jason Nelson‘s exploration into Digital Art and Writing and its place in academia and creative industries. Filled with tales of grand adventures and curious discoveries so great all manner of stars explode in the literary sky!

The intersection of writing and code

Sadly, many scholars limit the notion of texts to words. If someone suggested they could write a poem in sign language, you would, of course, immediately agree. Similarly I see the notion of text in digital poetry as extending to everything within the work, the interface and images, the sounds and movement, the words and interactivity. Sure, words still might be central to the poetic play snaking through my creations, but those words are attached to a larger grammar of media and code. 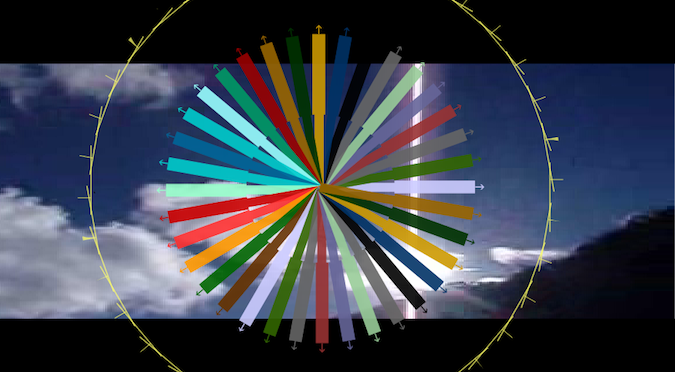 Up to this point, many writers have simply ported their print writing into an interface and complemented those words with soundtracks or background images. Or some writers program text (word) generators which ultimately spit out a print ready product. I prefer the work to only exist within its electric world, and I attempt to write with all the components.

This notion of text as everything is, I realize, incredibly problematic, nearly impossible to cleanly describe or teach. And yet it is the unclean, messy, and ill-fitting nature that charms.

As for the limitations, they seem to be largely self-induced. The only limitations I’ve encountered are the product of my poor coding skills or lack of cash. Given a team of coders and some cash, I shudder at all the glorious creatures I could send forth into the world.  So, I can’t disagree with Joe more. He’s a marvelously smart fella and a generous thinker and mentor, but anything I could imagine others would call a limitation, in literary, artistic or technical terms, is an opportunity for play and exploration. Given the fast evolving nature of tech and the relatively small number of artists and writers working with that tech, we’ve barely begun to explore the possibilities, and any supposed limitations are simply changes in grammar and translation (brain to tech to text).

One of the barriers to writers/artists exploring the creation of e-lit/art-games/net-art/d-poetry is the lack of coding/software skills. They either perceive it to be too hard for a creative brain, or don’t have the time or resources to learn the tools and methods. So, software like Twine, much like Eastgate’s early hypertext tools, provides writers/artists with an easy (easier) entry point.  However, if you agree that interface and media etc are critical texts within digital works, then Twine would, inherently, limit the literature being created.

So, I think Twine is a great starting point for writers, and it certainly has generated an interesting community who play within its constraints. Ultimately though, I would want to break Twine, make it do things it wouldn’t feel comfortable doing. Yikes, that sounded creepy.

Ah yes, Flash. Sniff. Sniff. It’s like losing a beloved pet. The warm snout of a visual and coding environment, deep with furry layers, and soulful interactive eyes, I am going to miss Flash (while secretly holding out hope it may not yet be dead).  So now, those of us addicted to using Flash are searching for alternatives and rethinking how and where we create. This isn’t easy, mind you. Walk into a painter’s studio, break all their brushes, smash their canvasses and pour their paint down an environmentally responsible drain. Then tell them to create with forks and tanning fluid. Ok…that doesn’t exactly fit the situation, but you get the idea.

So, what are the alternatives? There are some visual programming playlands like GameSalad or GameMaker. There will always be hard-code engines, built in javascript or html5 or xcode etc. And occasionally I’ll find a soon-to-be abandoned project on Github, that once held the promise of being a semi-WYSIWYG alternative to Flash.  Unity is quickly becoming an engine of choice for those with 3-D leanings.  I’m currently dabbling with all of the above, like shopping for a new pet by borrowing dogs from the shelter for the weekend. Perhaps I should get a cat.

The line between poetry and games

If you agree all elements of a work are texts, you would embrace the use of various media and interactivity in poetry just as you’d encourage more words within a game environment.  It’s the concept of “fuzzy boundaries” that strikes me as most interesting. Why should there be any boundaries?  There has always been a strong desire/interest for games with depth. Typically that depth comes across in the graphics and responsiveness of the game world. But increasingly people are yearning for a poetic or narrative depth, and the addition of words or visual poetry is one way of extending a game’s textual depth.

The most pressing boundary between games and literature seems to be an economic one. The larger scale games I’d love to develop require teams and resources beyond my financial reach. And games developers are hesitant to fully embrace poetic or literary forms because of their perceived financial downsides. They see poetry books selling a few hundred copies at best, or collections of short stories losing money.  And yet, I want to bark through their open windows, late into the night, kicking at the aluminium siding, that if my crazy poetry games (all six of them) can garner hundreds of thousands or millions of players/readers, then more accessible literary games could reach far more.

This financial issue is being addressed, at least partially, by crowd funding. And some creators are building small-scale literary games for mobile devices to sell on the app store. However the fast pace of change in tech, the devices and interactive tools we use, will mean both exciting new opportunities for creative play, but also significant financial concerns.

Admittedly, I am a bit sad about how collectors and institutions see interactive digital art as something that either should be free or only worthy of small commissions. The perception is that being a digital work there can be no original, no uniquely singular creation, and thus they are bought and utilized as copies. I am firmly a proponent of open source sharing of code and techniques, but I pine for the day when the art/literary world values our interactive creatures in the same way it values paintings or bookstore tomes.

I should really stop complaining, as I will always choose hundreds of thousands of readers/players/explorers over a bit more cash.  Now, if someone offered me heaps more, well I just might start creating locked down, personalized, one-offs. Tsk, tsk dear Jason. Tsk, tsk.

Games are admittedly saddled by the dominant presence of entertainment-centred creations. And this expectation can unfairly bias critics and players, keeping them from seeking out the more interesting and, in some ways, more powerful, politically/socially focused games. Unlike film or video, which begins as a blank canvas, games begin with an interactive engine or interface, and require plug-ins or consoles or other devices. This means that gaming must contend with both content and platforms and scale and playing location. And the public generally experience games through proprietary machines like X-Box or Playstation. So it can be difficult to convince curators and readers and others that a game can be a powerful force for change and artistic experience.

Having said that, games are an ideal vehicle for expression. They provide numerous ladders for the players/readers, various gateways or entry points into the artwork. As they are usually non-linear, multi-media and interactive, the experience will always be multi-dimensional, reaching the brain in curious and unique ways. So, as long as someone can overcome the economic and technical hurdles of game making, the possibilities for games are immense and largely unexplored.

I know some in the art-gaming world will disagree, but I don’t feel games have to be tied to complex puzzles or goals. A game can be anything that inspires play and discovery through interaction. If we substitute game with interactive play, there absolutely is no upper-limit. And I suppose that would make nearly all my digital poems/fictions/artworks some kind of game derivation.  As long as the results are unexpected and the content and play inspires exploration and changes perception, then interactive can almost be interchangeable with game. I can hear the bitter sighs and angry dismissals now, sadface.

As for my work, and what I strive for, I’m really not sure. Yes, I want to reach the back of people’s brains. Yes, I want to create experiences that are both poetic and absurd, that demand interaction and also remove you from the world, however briefly, transported into my imaginative playlands.  But then again, I feel as if I’ve only just begun exploring the possibilities of translating my imagination into and filtering through interactive interfaces and dynamic digital creatures.  And I want to stretch the borders between fields, between concepts, between disciplines and narratives. Most importantly, I want to create whatever the heck I want, to birth odd creations, whimsical and concerning, flashlights in the Wichita mountains, winter camping for the coldest of hands.

Calling all creatives: The Cube 2018 Artist in Residence program