Jason Nelson’s Adventures in Electronic Literature and Art: Part One

By QUT Precincts June 17, 2014
Electronic Literature is entering adulthood, having been an exciting and vibrant field for two decades. And yet its expansion into academia and the arts and creative writing communities has been met with various roadblocks and concerns. Jason Nelson, The Cube’s Digital Writer in Residence explores Electronic Literature and Digital Writing’s recent journey into higher education and the wider creative world. This is Part One. 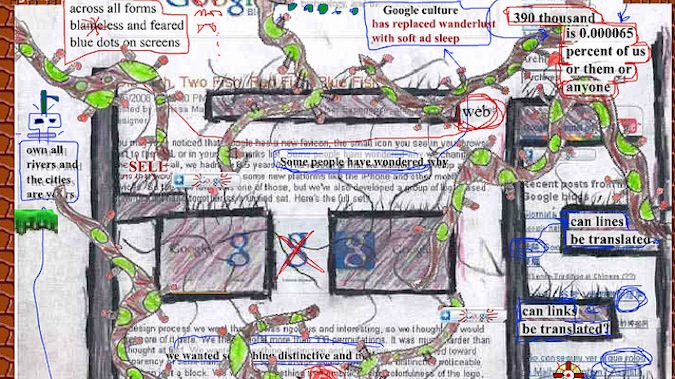 Electronic Literature: The institutional distinctions between literature, poetry and games

It’s a strange thing, disciplinary lines, these institutional taxonomies. There is this heavy driven, fund wielding hammer that whap-whap-whaps us into following some approved past, some discussed and re-discussed and re-re-un-challenged arts/literature/games discourse. I get it. We humans evolved from placing objects and fears and food into categories, eat and don’t, flee and pet, screw and secretly screw. So here we are now, many thousands of years of progress-like activities later, we still feel that need to chunk creations into mason jars. Frankly (and you’ll find most creative creators will overtly or quietly agree) it’s all pretty damn silly. Having said that, I am as guilty or more than anyone else, I’ve done my share of empire/field building.

Maybe I should explain.

I began my working life as a geographer and then a city planner. I jumped between half-jobs never being satisfied with the paperwork and policy prayers required by city governments. I’d been writing what I called poetry, but what other’s called experimental writing. And as my planning jobs had involved playing with GIS and ARCINFO, and I’d always toyed with programming and software on my self-built computers, I began merging my interest in tech play and word breaking. Note, I did this knowing nothing about Electronic Literature, Digital Poetry or anything of the sort. The field was charging along by this time mind you, being reviewed in the NYT and the ELO was having all sorts of fancy fun. But I was creating from a vague knowledge of various fields and interests, combining them to fit some nagging urge/desire/threat in the back of my brain. There was an alarmingly addictive freedom in creating whatever the heck I wanted to create, a digital naivety born from wanting to birth interactive textual creatures.

So do these fields inform my creations? I would be a creepy liar, watching neighbours through a spy glass, monitoring their movements for alien tendencies, if I said they didn’t influence me now. It’s hard to read a cruelly critical or blushingly glowing review/article/discussion of your work without it finding a home in the head grey. And the lure of free trips and an audience and good friends and a community also steer my work in certain directions. I am human and I need to be loved, just like anybody else does as the much hated/loved Morrissey once crooned. But still, I like to think at the core of my work is just a creator, a maverick without clear borders. Indeed I had always thought the grand agreement between the internet and its users, was that all these disciplinary lines would be crossed and broken, partially dissolved. We were supposed to enter some glorious age of creative wonderments, of creative play being the primary driver of net-based expression.  And while that has happened some, I’m still amazed at how these disciplinary lines control our fates and futures. Half-coherent sermon over.

So, let’s pretend I didn’t circumvent contemporary academia in the previous question. I live here in academia. So I’ll discuss my surroundings. I’ve always seen myself as a third generation creator in this field. And what seems to mostly define our practice, aside from the obvious changes in technology and software, is our origin stories. I think the third generation e-lit writers often came from other fields, were largely and initially outsiders, writers/artists who created things and somehow were pulled into the ELO fold. And curiously this third generation is dominated by poetry/poetry-like writers. Historically, other art/writing/music/theory movements were defined not so much by technologic advancements, but by themes and politics and methods and styles. Are we to be defined by Flash versus JavaScript, tablets versus laptops, mobile versus installation?  Sure these tech changes offer new tools and toys (and eliminate others), but forever learning new tools either makes for a field filled with a series of experiments, or one littered with ex-creators unable to make the next technological leap.

Going back to the third generation, I think the initial promise of the internet and its ‘anything goes’ mantra, from the late 90s and early 00s, spurred many creatives to exploring the intersection of art and text and tech. We created outside institutions and/or fields.  As to why we tended to be poets, I just feel poetry offered more room to play with form and content. It is easier for a poet to embrace non-linear and multi-media methods and texts. And we were more comfortable with creating shorter works, moving away from the lengthy CD based tomes of hypertext. Experimentation with language and the acceptance of the idea that text extends to more than just words, also spurred this third generation of digital poets.

So then what is the 4th generation? We are seeing the first few crops of academically trained digital creators. Their work is polished and pretty. I sometimes cringe at the Ad-for-Apple appearance and super functionality and yet marvel at the craft and thought. Dare I say when one of these writers lets go of their polish, we might just see the first true masterpiece of E-Lit.

But the question comes: Are we accepted in academia?  Yes and no and yes and no. A few years ago, I was the finalist for a position in the English Department at the U of Wisconsin. They had thrown the net widely and it was between me, a digital poet, and a theorist writing about digital bits. I was excited, as they are one of the top English departments and creative writing programs in the world. In the end, the vote was 3-4, I lost the job. And evidently it was the creative writers who voted against me.

What that means is, the study of Electronic Literature, digital poetry, art-games etc….is growing fast and massively in academia. BUT, the practice of creating these works is lagging behind, and is often actively derided or disdained.  So universities might likely hire someone who writes about my work, but won’t consider hiring the actual creator. Hmmmm.

It’s been said by others, more revered than I, that play is critical to human anything/everything.Play invites curiosity and wonder. When you play you inhabit the experience, it reaches some deep synapses in your brain. I want the player/reader to live, however briefly, within the experience of my digital poems/artworks/games/creatures.

And while I feel the best poetry involves play with language and form, either darkly or fun…um…ly, funly, some contemporary print poetry is driven by tradition and craft, a dissection of poetic principles, the display of mastery and the inclusion of trendy notes and references. Instead, play is about error, it’s about breaking language and code, it’s about unexpected and unintentional outcomes and responses.  I am using “and” far too often here.

Additionally, I was raised on games, was never without a gaming console. Interfaces are a language and a grammar and the game engine, platform or shooter and on, is one that my and all following generations deeply love and understand. Admittedly, that does limit my audience somewhat. Older readers can struggle to even navigate through my work, however easy I try to make the interfaces or game play. In fact, nearly all of my works include arrows, a reference to the comprise between providing easy to use functionality and requiring the reader to play.

Calling all creatives: The Cube 2018 Artist in Residence program