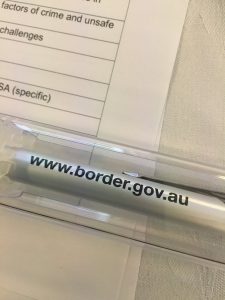 We are aware that ANZSOC has recently received social media criticism for accepting a ‘silver sponsorship’ from the Department of Immigration and Border Protection (DIBP) for the 2017 conference. We are writing to express concern but also seek clarification about the nature of this sponsorship.

There is an emerging sentiment that this sponsorship was inappropriate for the Society’s annual event. We recognise that the DIBP has a wider ministerial function beyond border protection, however  the remit between DIBP and Australian Borderforce (ABF) is inextricably interwoven. Given the national and international condemnation and controversies surrounding DIBP’s  actions and policies in recent times we are surprised that ANZSOC would take the arguably injudicious decision to accept this department’s sponsorship.

While we acknowledge that DIPB , as mentioned, is responsible for customs and citizenship portfolios, much of its resources are devoted to border protection and the work of ABF. Indeed, the DIPB is jointly headed by Secretary Pezzullo and ABF’s Commissioner Quaedvlieg.

As you’ll be aware, the ABF as an operational arm of the DIPB, has outsourced state functions to corporate entities. Such privatisation of Australian border security, as part of the Pacific Solution, has been mired in allegations of scandal, torture, tax evasion, corruption and human rights abuses resulting in widespread public protest and condemnation. For ANZSOC to grant ‘silver sponsorship’ to a much maligned state-corporate complex with its reportedly unjust, abusive and illegal response to vulnerable people seeking asylum, is an indictment on the Society and an insult to those members who have committed their careers  to championing the plight of victims and to critiquing state and corporate deviance.

We note ANZSOC’s tweeted response to the Australian Critical Race and Whiteness Studies Association’, notably that ‘Criminology has always involved debate re contentious issues. The conference is an important forum to bring different players together 2 have these challenges conversation’. We agree, however, it is one thing to provide a forum for robust debate and offer a platform for all parties to exchange dialogue, it is quite another issue to receive sponsorship from one side of the debate only. Moreover, it is not clear how this year’s conference managed to successfully engage opposed voices in a forum that debated the challenging issues you allude to.

Without clarification of the sponsorship arrangements, and without ANZSOC attempting to disentangle the broader roles of DIPB from ABF, one is left with the impression that the conference was endorsing the Pacific Solution, Manus Island policies and the associated scandals mentioned above. Rightly or wrongly, this is the emerging picture, and the growing criticism on social media attests to that fact.

Would you kindly clarify the nature of the sponsorship. Why did ANZSOC choose to seek sponsorship from a Commonwealth department condemned by the international human rights community and mired in allegations of torture and abuse? We suggest that it is imperative that you as President publicly clarify ANZSOC’s position, and dispel the emerging suspicion that the Society, by virtue of accepting sponsorship, is supporting the punitive and widely-condemned offshore detention policies of the Australian Government.

The CJRC and the Asian Criminological Society will be co-hosting the Crime and Justice in Asia and the Global South International Conference in Cairns from 10-13 July. The conference brings together the 9th Annual Conference for the Asian Criminological Society, and the 4th biennial International Conference for Crime, Justice and Social Democracy. The purpose of co-hosting the two conferences is to promote a global criminology more befitting of the contemporary world in which we live. END_OF_DOCUMENT_TOKEN_TO_BE_REPLACED

Next year, the CJRC and the Asian Criminological Society will co-host the Crime and Justice in Asia and the Global South International Conference in Cairns from 10-13 July. The conference brings together the 9th Annual Conference for the Asian Criminological Society, and the 4th biennial International Conference for Crime, Justice and Social Democracy. The purpose of co-hosting the two conferences is to promote a global criminology more befitting of the contemporary world in which we live. END_OF_DOCUMENT_TOKEN_TO_BE_REPLACED