The Final Report of ARC Field Research on Women’s Police Stations, Buenos Aires, Argentina is now published in English and Spanish, and free to download from the project page

Summary of the Report
Women’s Police Stations are unique innovations that emerged from nations of the Global South in the second half of the 20th century to address violence against women. This report presents the results of a world first study of the unique way these stations called Comisaría de la Mujer (CMF) prevent gender-based violence in the Province of Buenos Aires Argentina. In Spanish and Portuguese these stations are called Police Stations for Women, for the sake of ease in this article we call them Women’s Police Stations. Little is currently known about how this distinctive multi-disciplinary model of policing (that includes social workers, lawyers, psychologists and police) prevents gender violence.
First, we outline the background to the emergence of Women’s Police Stations in the societies of the Global South designed explicitly to respond to and prevent gender-based violence. These stations are distinguished from the women only police units that existed in most parts of the Global North that restricted women in law enforcement to caring for women and children in custody (Cartron 2015, 9). The main substance of the report presents the results of our empirical study on the role of Women’s Police Stations in responding to and preventing gender violence in the Province of Buenos Aires, Argentina. The province established its first women’s police station in 1988 and now has 128. They account for one in five of all police stations in the province and since 2009 have had a legislated mandate to prevent gender violence which distinguishes them from other Women’s Police Stations. We interviewed 100 employees from ten of these unique multi-disciplinary stations.
The final section critically reflects on the virtues and limits of Women’s Police Stations as a model for addressing and preventing gender-based violence. The report compares traditional policing versus specialist policing approaches to the prevention of gender-based violence. While not without limitations, we conclude that specialised Women’s Police Stations in the societies of the Global South widen access to justice, empower women to break the cycle of domestic violence, and engage in a form of community policing that challenges the social norms that sustain gender violence. As a by-product they also provide a career in law enforcement for police (male and female) who specialise in responding to gender violence. The study is framed by Southern Criminology which reverses the notion that ideas, policies and theories can only travel from the Global North to the Global South. The study is funded by the Australian Research Council (ARC) and includes a multi-country team of researchers whose contributions we gratefully acknowledge.

For more information about the ARC project click here

The Australian Law Reform Commission (ALRC) Review of the Family Law System is the first comprehensive review of Australia’s family law system since its commencement more than 40 years ago.The ALRC Report on the Review of the Family Law System findings and recommendations have serious implications for domestic violence, and women and children will be deeply affected by how they are implemented. Please join us for an interactive discussion and networking luncheon to consider the report and recommendations for domestic violence cases as part of Domestic Violence Awareness Month.

This is a partnership event between Brisbane Domestic Violence Service and QUT Law. END_OF_DOCUMENT_TOKEN_TO_BE_REPLACED 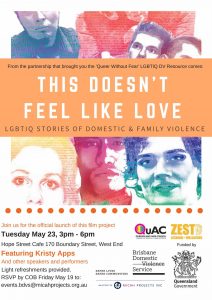 Please join Brisbane Domestic Violence Service to launch the film project ‘This Doesn’t Feel Like Love,’ a collection of LGBTIQ stories of domestic and family violence. Kristy Apps will be performing alongside other speakers and performers. Light refreshments provided.