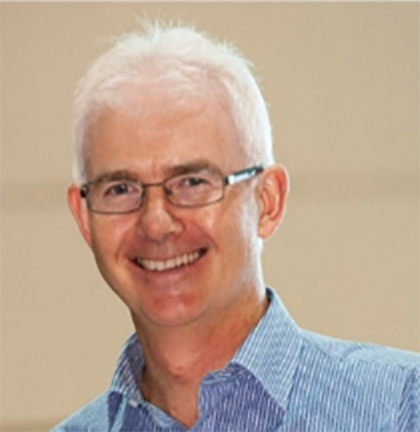 QUT Centre for Justice is delighted to welcome Michael Hogan as an Adjunct Professor to QUT School of Justice, Faculty of Law.

Michael has a BA(Hons) / LLB from the University of New South Wales (1984). Michael was admitted as a Barrister of the Supreme Court and subsequently transferred to the Roll of Solicitors. After stints at both the NSW and Australian Law Reform Commissions, Michael worked in the NSW Government before moving to a community legal centre – the Public Interest Advocacy Centre – for nearly a decade, before moving into the NSW Premier’s Department.

The common thread to Michael’s career has been enabling ‘people, places and partnerships’ to be the best they can be. Michael has extensive knowledge of policy, program and service design and delivery in the areas of crime and violence prevention, family support, child safety, disability, multicultural affairs, youth affairs, Indigenous affairs, youth justice, community engagement, community development, place-based initiatives, and citizen and consumer advocacy.

Michael was a long-standing member of the national Child and Families Secretaries Group and has been the Qld Government DG Champion for the Indigenous communities of Hope Vale, Doomadgee and the Torres Straits. Michael was co-chair of the Organising Committee for the 2015 United Nations / Queensland Government’s International Conference on Community Engagement. He is an Executive Fellow of the Australian and New Zealand School of Government (2011).
Michael was the CEO of the Public Interest Advocacy Centre in NSW until 1997, and has served on statutory bodies – the NSW Community Services Review Council and the NSW Juvenile Justice Advisory Council, and on non-government boards – including the NSW Council of Social Services and the Consumers’ Health Forum of Australia. Working as a public interest advocate, Michael was instrumental in the establishment of the NSW Youth Justice Coalition, the National Children’s and Youth Law Centre and the NSW Public Interest Law Clearing House, and in the establishment of the Consumers’ Health Forum of Australia.

Since finishing as Director-General in mid-February 2020, Michael has established Michael Hogan Consulting, an independent advisory service working for public purpose across the government, community, tertiary and corporate sectors with a focus on strategy, leadership and alliances.

Michael is co-chairing the Australian Research Alliance for Children and Youth (ARACY) Great to Eight Research Agenda Governance Group and is a supporter of the EveryChild campaign. He is currently active in advocating for place-based initiatives, and science & knowledge to policy & service initiatives, to help break cycles of disadvantage and to address adverse impacts on children, young people and families in crisis recovery responses and planning.

Michael is excited to join the QUT team as an Adjunct Professor, School of Justice in the Faculty of Law, and looks forward to working with colleagues and stakeholders across the university and through initiatives such as the Centre for Justice.

Michael’s email at QUT is m21.hogan@qut.edu.au