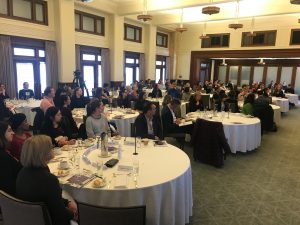 Author and commentator Clementine Ford facilitated a panel comprising Dr Jessa Rogers (UNE); Associate Professor Michael Flood (QUT); Ashleigh Streeter (COO Jasiri); and Michael Livingstone (Jesuit Social Services). Flood and others at the event noted that while there is widespread awareness among women and men of gender inequalities in Australia, there is also among men in particular a troubling emphasis on how men have been ‘forgotten’ in or excluded from measures to improve gender equality.