If at the beginning of the year, somebody had told me that in September I would be attending a pre-departure briefing in Canberra and then in October be representing the QUT Business School at the IMF & World Bank Annual Meetings in Washington DC as an Australian Youth Delegate and a Global Voices Scholar, I wouldn’t have believed a word they said. Fast forward to now, and I can say with ease that the Global Voices Scholarship program has been one of the most incredible opportunities I have ever had and an experience that I will never forget. My name is Nick and I am currently studying a Bachelor of Business (International Business) / Bachelor of Laws (Honours) and this is what my Global Voices Scholarship was like!

The Global Voices Scholarship program essentially has three components: first to attend a pre-departure briefing program in Canberra, second the completion of a Policy Fellowship and lastly attending an international delegation, which in my case was the IMF & World Bank Annual Meetings held in Washington DC in October 2020. The pre-departure briefing in Canberra was an experience complete in itself as a group of fellow Global Voices Scholars from universities around Australia, came together to work on preparing for the various international delegations that would follow. Three intense days were filled with policy-writing workshops, media engagement training, attended sessions at the ANU Crawford School of Public Policy, visited the American Embassy, got a behind the scenes tour of Parliament House by former Speaker of the House of Representatives Anna Burke, meetings with Government representatives from DFAT, Treasury and also individual meetings with both Federal Members of Parliament and Senators. 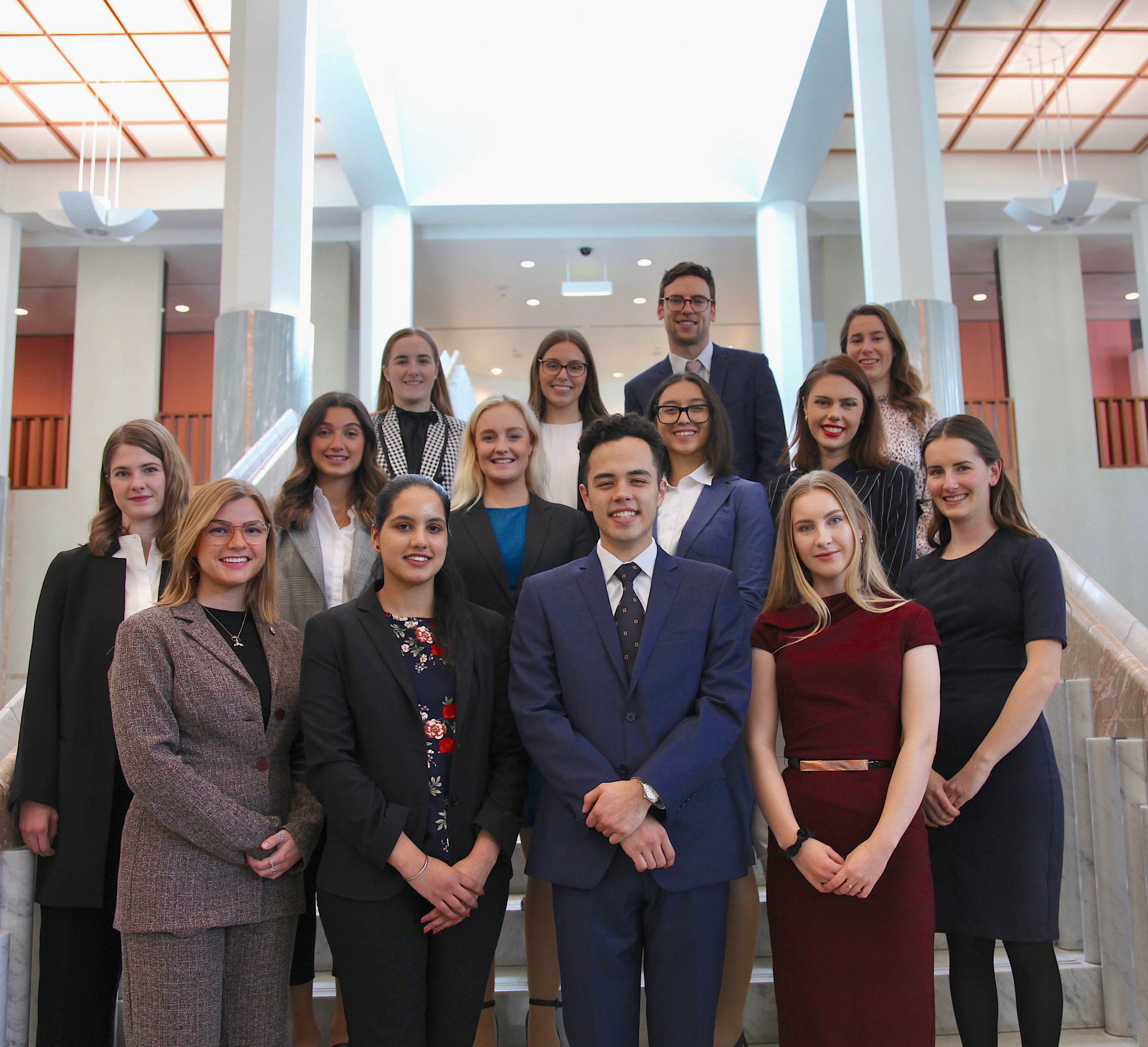 After hearing from and speaking with experts across a wide variety of policy backgrounds throughout the pre-departure briefing program, I was able to narrow the focus of my policy proposal specifically down to the area of mandatory governmental regulated environmental impact food labeling policy. The policy proposal I developed, overtly addresses and combats the effects of climate change, which is one of the most seminal issues that the earth and the human race are facing. My policy proposal harnesses the power of consumer choice by enforcing food producers to disclose the environmental impact of their products and hence, given consumers would be able to make better-informed purchasing choices, the policy encourages produces to reduce their impact and to become more sustainable. 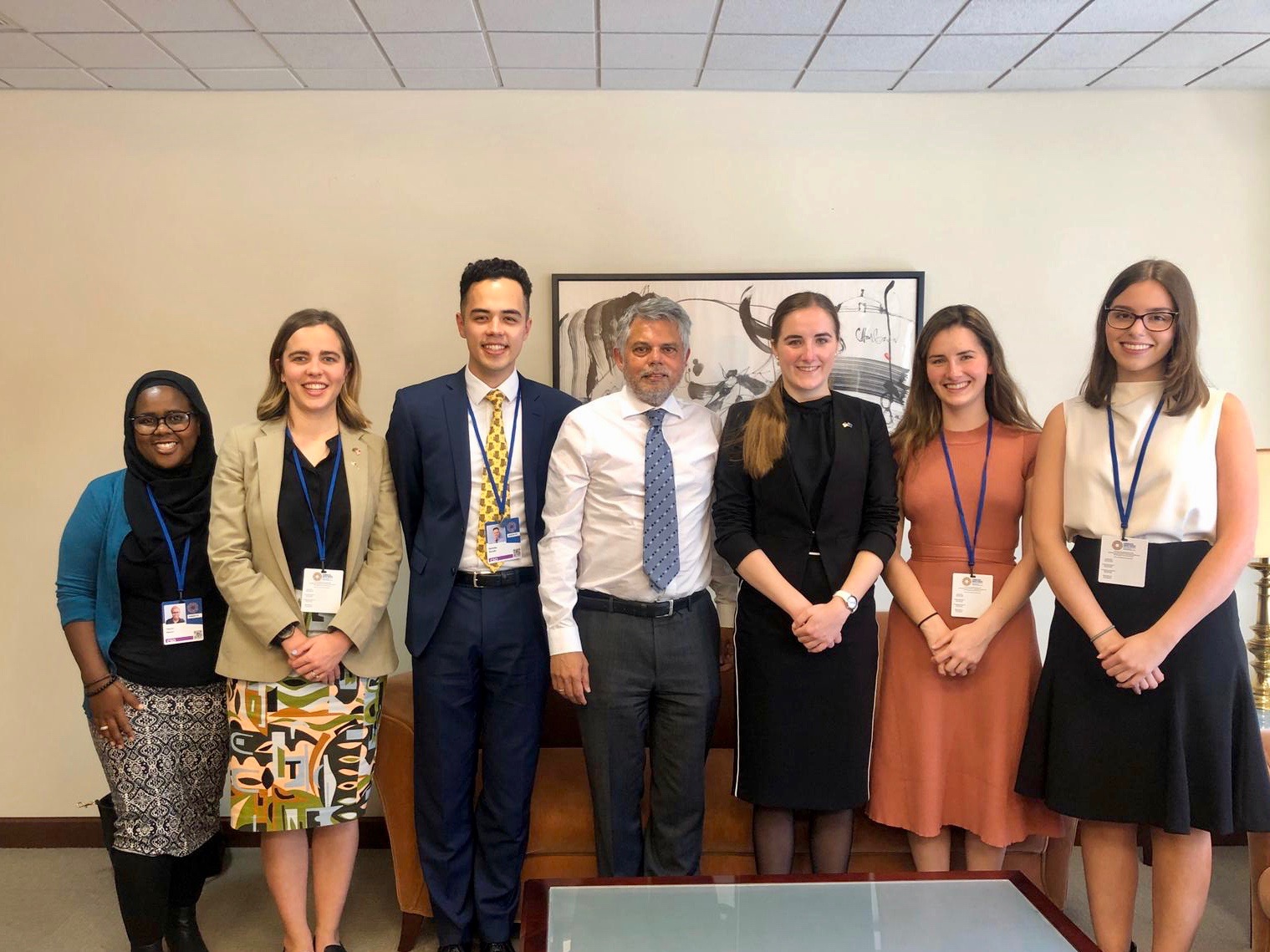 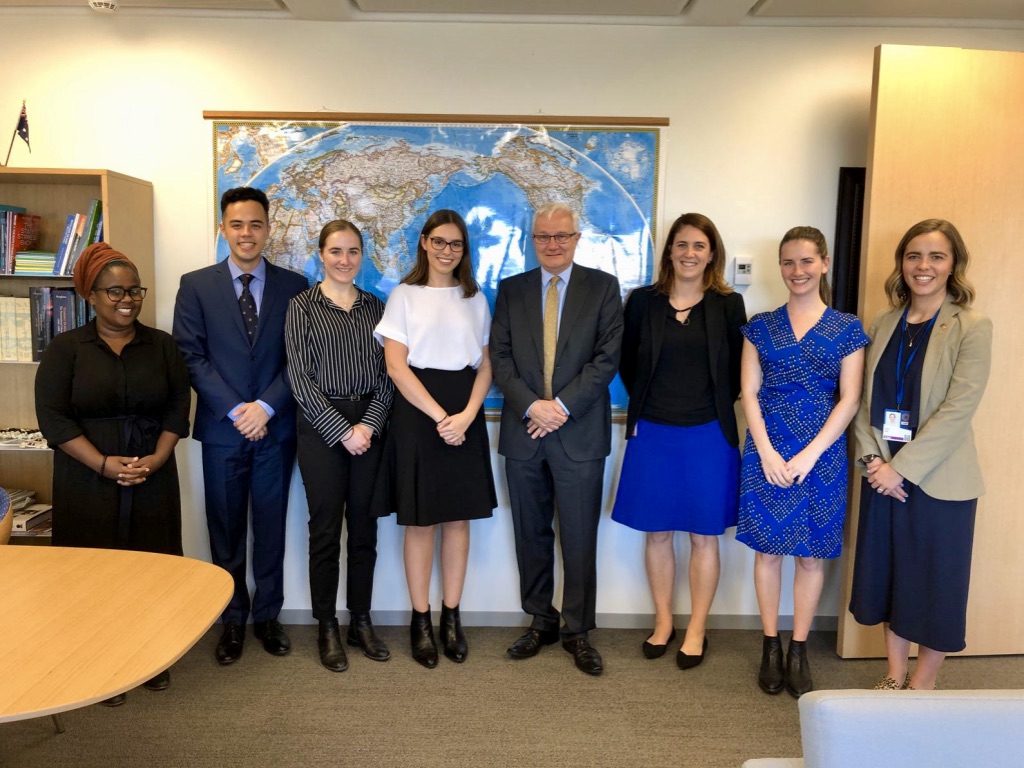 Attending the IMF & World Bank Annual Meetings in Washington DC as a representative of the QUT Business School and as an Australian Youth Delegate and Global Voices Scholar was a once in a lifetime experience. We started off Day One by attending a variety of really interesting sessions with topics ranging from bilateral trade balances, crypto assets and global energy consumption trends. We were also lucky enough to snag a meeting with World Bank Group Alternate Director Gerard Antioch where we talked about the role the World Bank plays in global development and both current and future challenges multilateral institutions such as the World Bank faces. We also had the opportunity to meet with Deputy Secretary Nigel Ray who is an executive director at the IMF and he was able to give us some insight as to how the IMF works and what it’s like representing a diverse range of countries that includes New Zealand, a list of Pacific Islands, Mongolia, Uzbekistan, the island nation of Seychelles and South Korea.

Day Two at the meetings was filled with sessions covering topics such as national digital strategies and Big Tech and the future of finance. Global Voices also ran a civil society forum about young people in the new work order which is something that is highly relevant to a university student such as myself. We then visited the Australian Embassy where we had a meeting with Tim Bradley who is the Minister Counsellor who represents the Departments of Industry, Innovation and Science and Education and Training and his role is to help to strengthen Australia’s engagement across North America. We also attended a dialogue session with Kristalina Georgieva who is the new Managing Director of the IMF which was incredibly inspiring.

We started Day Three at the Annual Meetings by attending a seminar where panelists discussed how national factors and the international community could speed the path to resilience in fragile states. After this, we then moved to the CNBC Global Economy Debate where panelists such as Managing Director of the IMF Kristalina Georgieva and Co-Chairman and Co-Chief Investment Officer of investment firm Bridgewater Associates Ray Dalio gave their take on the global economy in light of the effect escalating trade tensions are having on areas like technology and currencies. It was both fascinating and disconcerting hearing such powerful and knowledgeable people giving their opinions on the challenges the world economy faces. However, I was left reassured that the people in these positions realise the issues the global community must tackle. I was then fortunate enough to meet up with an economist named Christian Bogmans who works in the Research Department (Commodities Unit) at the IMF. Christian had previously run a dialogue session at the Annual Meetings about global energy consumption trends and as his background in environmental and energy economies was related to my policy paper, I went up to ask him a few questions after his session. Christian was nice enough to set up a meeting with me where we discussed my policy proposal in-depth, and he was able to give me some great advice. Christian and I then attended a biodiversity session run by the World Bank together. At the biodiversity session, the speakers highlighted the threat of extinction that more than a million species of animals and plants face and how this puts at risk the ability of nature to provide food, water and to regulate the climate. All the Global Voices Scholars then met up again to see Governor of the Reserve Bank Phillip Lowe present at the Governor Talks session where he spoke about how underlying uncertainty and geopolitically turbulent times have negatively impacted investment across the world economy. Although his message was rather grim, I was still filled with pride about the fact a fellow Australian was there speaking about such important topics on a global platform. The last days at the Annual Meetings weren’t as intense but a highlight was seeing the Advisor to the President of the United States Ivanka Trump, President of the World Bank Group David Malpass and Chairman and CEO of Goldman Sachs David Solomon speak about unleashing the potential of women entrepreneurs through Finance and Markets. 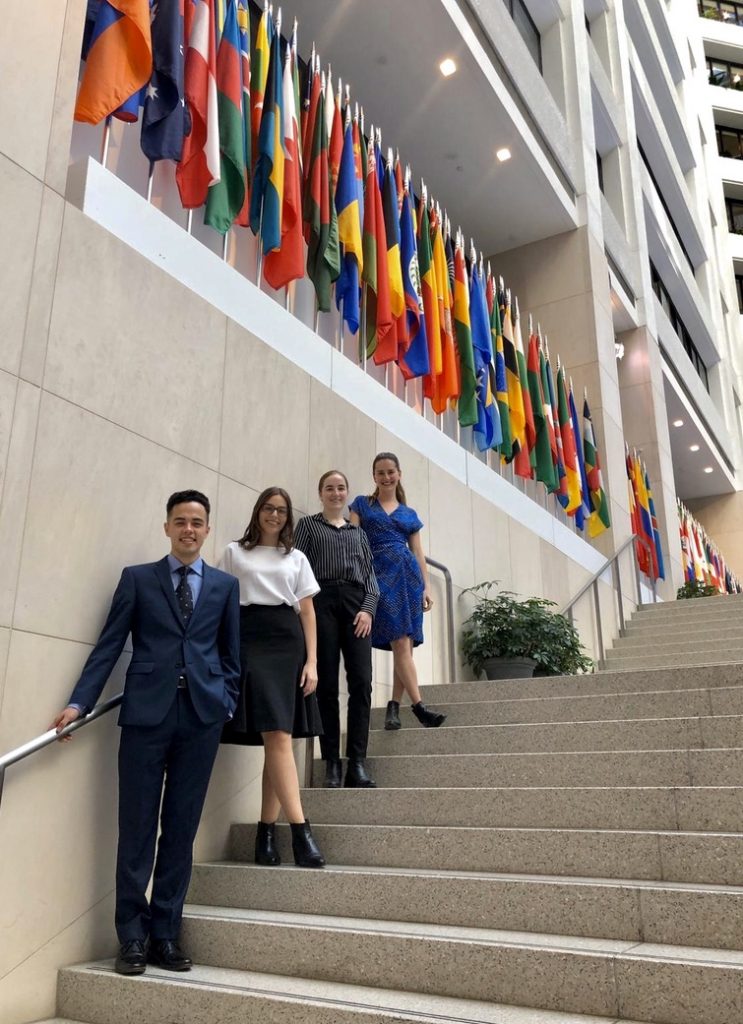 The time spent in Canberra at the pre-departure briefings and in Washington DC at the IMF & World Bank Annual Meetings has been one of the most rewarding experiences I have ever had and I am grateful for the QUT Business School for sponsoring me on the Global Voices Policy Fellowship Program. This is a unique experience that is not offered to many students and provided me with unparalleled first-hand experience of what attending a multilateral delegation is like. The support from both the QUT Business School and the management team at Global Voices was fantastic and for any students thinking about applying for this program in the coming years I cannot recommend it enough! 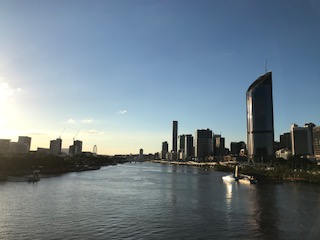