Smart cities and temples: the real-world experience in China

A city made to make the world turn faster, the roads lined with cars powered by thunder. Thousands of startups work around the clock, more than in Silicon Valley. Shenzhen is the tech capital of Asia, situated in China along the Hong Kong border.

The QUT alumni we met spoke of Shenzhen in awe, vast factories churning out the latest drones and greatest gadgets, while the entire “smart city” was saturated in all kinds of new-generation technology. Australia, our home, seemed totally backward in comparison.

I wanted to see the brighter future before it hit us.

Everything high-tech in China is a status symbol, the more innovative and valuable, the better. Despite the amount of Tesla’s rolling around and iPhones brandished in public, my fellow QUT AMPR tour members had grave misgivings about crossing the Chinese border and confronting what they saw as an Orwellian regime.

However, we discovered a totally different China to what I, or my colleagues, expected. We found a country that had held onto its unique character and history through a century of turmoil, and one where the heavily-armoured police squads were courteous with giving directions to tourists.

The park also featured an authentic miniature Great Wall of China, ethnic villages to explore, shrines and temples to all types of religions. We also won some prizes from an archery contest, proving our vision of Shenzhen was on-target.
Despite being a global technology hub, Shenzhen still enjoys playing with bows and arrows.

The Shenzhen market is amongst the biggest in the world. Operating like a shopping mall, shoppers barter for prices on clothes, jade, antiques and electronics.
We managed to score jade jewellery, monkeys and dragons for less than half the offered price. I also joined Professor Gayle Kerr in negotiating lower prices on clothes, looking at full-price clothing in Myer will simply never compare to the thrill of bartering. After visiting the markets, every other shopping district doesn’t seem as spectacular, or “big”.

What we experienced in Shenzhen was totally different to what made our Australian colleagues apprehensive.

Shenzhen wasn’t full of soldiers and rice paddies. There was no communist propaganda blaring in our faces, the military police were nice and left us alone. We were free to take photos. We weren’t interrogated when applying for Chinese visa’s.
So this raises the question, why does everyone view China so negatively?

Maybe it’s tall poppy syndrome. China’s digital infrastructure is far more advanced than Australia. Their economic environmental policies, such as facilitating uptake of electric cars and industry, are also more advanced than Australia. The public transportation system runs on time like clockwork. Entire cities are connected with public wifi, while I can’t even get Optus mobile coverage in some parts of QUT. There’s also more internet coverage in rural China than in outback Australia.
These alone are undoubtably impressive for what is supposedly a harsh communist regime. We only went to Shenzhen for a day, who knows what else may be found there?

To find out for yourself, trust your own vision. 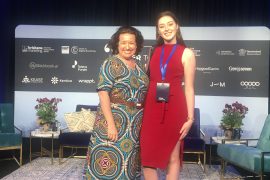