The early bird registration deadline is almost here, make sure you register before the 31st October to ensure you receive the discounted registration.  (Please note that when you enter your details on the registration form you can generate an invoice for the pay later option, payment must be made within 7 days of early bird closing to secure your early bird rate).

You may also wish to register for the Policy Forum presented by Small Enterprise Association of Australia and New Zealand (SEAANZ), this event is held in conjunction with ACERE and is an afternoon focused on the impacts on small firms of public policy development and implementation.

We are very much looking forward to welcoming you to Brisbane, don’t forget to check out accommodation page for information on where to stay. We have an accommodation block with Oaks 212 Margaret which can be booked through the online registration system, but if you would like book elsewhere check out our links for alternative accommodation. 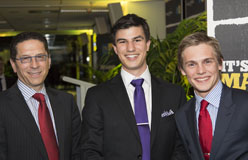 A proposal to encourage shoppers to “round up” their grocery bill with a charity donation has helped win two QUT business students $20,000 in the annual CPA Big Break Project.

They beat tertiary teams from every Australian state and New Zealand to win their prize money, plus another $50,000 for their university.

Sam said Make-A-Wish had a backlog of $3.71 million of wishes for seriously ill children and had been forced to put a freeze on new wishes, due to the increasingly difficult challenge of raising donations and lack of government financial support.

“That’s why they were involved in the Big Break – they are in need of help and good ideas,” Sam said.

“Our brief was to look at the use and benefits of social media, potential corporate partners and potential workplace giving programs.

“We provided research and ideas on all those areas but then gave them an additional ‘X factor’.”

That X factor was a quirky idea to recommend that Coles supermarkets (already a Make-A-Wish corporate partner) introduce a “round-up to Make-A-Wish” idea at its check-outs.

“If somebody is buying $29.72 of groceries, the staff member can ask them if they want to round up the total value of their basket and donate the difference to Make-A-Wish,” James said.

“We ran 1000 simulations to account for variations in customer participation rates and donations and – given that Coles has 78 million customer transactions per month – our models found that Make-A-Wish would receive $10.8 million over the month-long campaign.”

Only time will tell whether or not James and Sam’s idea comes to fruition, but they are optimistic that the charity will pursue some of their recommendations.

The two QUT students have not yet decided how to spend their $20,000, but are considering putting it into a social enterprise of which they are founding partners and are still keeping under wraps at this stage.

The additional $50,000 prize money which went to QUT is likely to be used to help students attend international business competitions.

James and Sam are already focused on their next challenge – representing QUT in the next Citi Bank international business competition in Hong Kong in November.

The CPA Big Break Project is an initiative of CPA Australia, one of the world’s largest accounting bodies. James and Sam also each won CPA Program Scholarships as part of their prize.

Apply Now through December 15 to get priority review!!

Are you leading a startup looking for an institutional round of funding, strategic connections and/or partnerships within the next 12-18 months?

Springboard: Australia 2013 is a relationship-building community accelerator designed exclusively for women-led investment-ready, high-growth tech companies. Our accelerator program isn’t just about funding. It’s about accessing and leveraging human capital and surrounding each selected entrepreneur with a “Personal Advisory Board,” an expert team of coaches and connection-makers.

We’re looking for great growth- and seed-stage technology companies with the following criteria:

The application takes less than an hour and is due by December 15. Apply now! Early applications will get priority review. If you know someone who would benefit from this program, please forward this along. Learn more at www.springboardenterprises.

RiverPitch is a Brisbane community of investors formed to help the early stage and startup sector access funding who see themselves as filling a gap between current Angel investment and Venture Capital.

Their goal is to bring a different approach to capital funding in Brisbane. By bringing together pre-screened investors and pre-screened entrepreneurs in a social environment where ideas can be pitched offering an alternate way to access funding.

River Pitch is are about getting together great ideas with great investors. It is about de-formalising the search for the next investment and bringing together the innovators and the those supporting innovation. They are also about bringing together investment ready ideas and teams with actual investors in order to help get the ideas funded.

They do this through an event driven schedule, identifying the entrepreneurs with the right ideas and exposing them to the early stage and angel investor community.

The Cellar at the Polo Club Brisbane, 1 Eagle Street, Brisbane

This is an invitation only event for invited guests (please visit http://riverpitch.com/ for an invite). The night will be a 3 course meal, 4 pitches and good company – come and join other investors in a night of pitching and fine food. The Cellar at the Brisbane Polo Club is the venue for this event – please see below for dress requirements.

RSVP : 20 October 2012 (After validating your Membership application you will receive a RiverPitch Eventbrite event invitation)