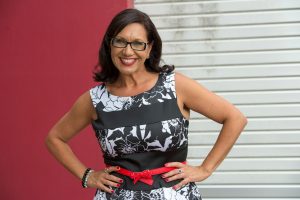 Dr Heiss is a member of the Wiradjuri nation of central New South Wales and is one of Australia’s most prolific and well-known authors of Aboriginal and Torres Strait Islander literature.

A poet, satirist and social commentator, Dr Heiss will be speaking about her work and the Aboriginal and Torres Strait Islander pioneers in literature who have inspired her next Wednesday 8 August at QUT Kelvin Grove Library next week (SOLD OUT see below for waiting list email).

If you didn’t manage to get a ticket, we have a number of Dr Heiss’s books available to borrow from the QUT Library including:

Avoiding Mr Right (2008) Offered the professional opportunity of a lifetime, Peta leaves her coastal life and doting boyfriend James in Sydney for a 12 month stint in the ‘fashion capital of Australia’.

Am I black enough for you? (2012) Anita Heiss gives a first-hand account of her experiences as a woman with an Aboriginal mother and Austrian father, and explains the development of her activist consciousness. Read her story and ask: what does it take for someone to be black enough for you?

This collection of social observations, thoughts and conversations will challenge the reader to consider issues of imposed and real Aboriginal identity, the process of reconciliation and issues around saying ‘sorry’, notions of ‘truth’ and integrity, biculturalism and invisible whiteness, entrenched racism and political correctness.

Please email:   k.csatlos@qut.edu.au to go on to the waiting list for this event

QUT Open Day is this Sunday the 29th July, and it’s the perfect opportunity to explore everything happening at QUT, whether you’re a prospective student or currently studying here. 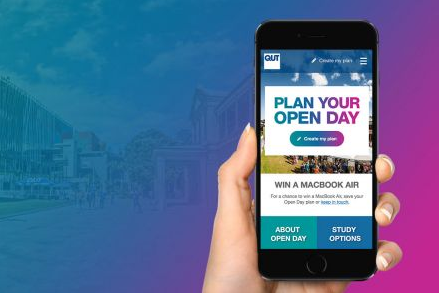 On QUT Open Day @ Gardens Point you can:

While you’re visiting QUT, why not catch a free shuttle bus to Kelvin Grove?
There will be tours of the campus and facilities, including the Library and HiQ.
Buses will run every 15 minutes from 8am to 3.45pm 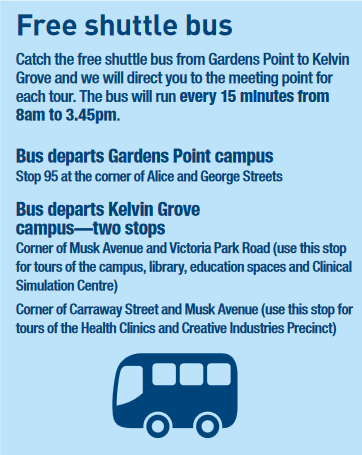 A visit to QUT Library is highly recommended!

For more details, check out the QUT Open Day Program and create your own customised day plan for all of the seminars and tours you’d like to attend.

O Week is a great time to explore QUT Library!

You can also take a virtual tour of the Gardens Point and Kelvin Grove Libraries.

These short 360 videos will introduce you to the services and resources located within QUT Libraries.

What a great theme for this year’s NAIDOC week, celebrating the pillars of Aboriginal and Torres Strait Islander society – the women.

At QUT Library we thought we’d do the same by highlighting a few books and eBooks by some truly inspirational female indigenous authors.

Taboo takes place in the present day, in the rural South-West of Western Australia, and tells the story of a group of Noongar people who revisit, for the first time in many decades, a taboo place: the site of a massacre that followed the assassination, by these Noongar’s descendants, of a white man who had stolen a black woman. They come at the invitation of Dan Horton, the elderly owner of the farm on which the massacres unfolded. He hopes that by hosting the group he will satisfy his wife’s dying wishes and cleanse some moral stain from the ground on which he and his family have lived for generations.

A collection of powerful, true stories of Aboriginal life This anthology brings together 15 memoirs of growing up Aboriginal in Australia and includes works from bestselling author Sally Morgan; and the critically acclaimed artist, author, and activist Bronwyn Bancroft. These true stories of adolescence are as diverse as they are moving, and offer readers insight into the pain, humor, grief, hope, and pride that makes up Indigenous experiences.

The Quiet Revolution: Indigenous people and the resources boom by Marcia Langton

When W.E.H. Stanner delivered the Boyer Lectures in 1968, he gave credence, perhaps inadvertently, to the widely held assumption at that time that Aboriginal life was incommensurate with modern economic life. Today, the expectation is quite the reverse. The emergence of an Aboriginal middle class in Australia in the last two to three decades has gone largely unnoticed. There are hundreds of Aboriginal businesses and Aboriginal not-for-profit corporations with income streams, delivering economic outcomes to communities on an unprecedented scale. This text is an investigation into the dependency of Aboriginal businesses and not-for-profit corporations on the resources industry, and their resultant vulnerability to economic downturns.

NAIDOC Week events at QUT this year include a free screening of The Sapphires on the A block lawn at KG (9th July 4:30-7.30pm) and a  panel discussion involving one of the original Sapphires, Aunty Lois Peeler.

Dr Anita Heiss has been confirmed as this year’s speaker for Paperbark: First Nation Narratives (8 August from 10.30 , KG Library) .  Dr Heiss will speak about her work and the Aboriginal literary pioneers who have inspired her.  She is an inspiring speaker so definitely something to mark out in your calendar. 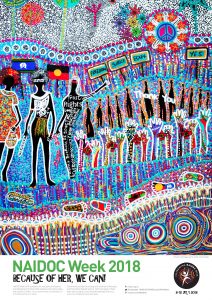 Painted by Bigambul woman, Cheryl Moggs, from Goondiwindi, the painting portrays the 2018 theme, Because of her, we can!   It shows the courage and resilience of Aboriginal and Torres Strait Islander women. Listen here to the artist speak about her inspiration for the poster.