Keep track of citation counts of your own articles and find high impact research in your field with Web of Science.

Web of Science indexes abstracts and citation information in subject areas such as science, social science and humanities.

Databases available via Web of Science include:

Online Videos and Scripts from the Alexander Street Press.

Counselling and Therapy in Video
Contains hundreds of hours of videos of psychology interviews and therapy sessions. It is able to be browsed and searched by key words regarding client disorders, cultural background of clients, types of therapy sessions and therapist. Video types include consultations, counseling session, demonstration, documentary, dramatized scenes,  interview, lecture/presentation and personal narrative. The 465 videos in this collection can also be found through the library catalogue.

Dance in Video
More than 520 videos of dance productions and documentaries by the most influential performers and companies of the 20th century. Selections cover ballet, tap, jazz, contemporary, experimental, and improvisational dance, as well as forerunners of the forms and the pioneers of modern concert dance. The videos in this collection can also be found through the library catalogue.

American Film Scripts Online
American Film Scripts Online contains more than 1,000 scripts with detailed, fielded information on the scenes, characters and people related to the scripts. The primary focus of the database is the written work, rather than the film itself.  It allows users to see and understand the structure of films, character development, beginnings and endings, plot points and scenes

Most of the scripts have never been published before, and nowhere else are they available online. The scripts within AFSO have been chosen by the following criteria:

The QUT Library survey is still open! Give us your thoughts and possibly win an iPad!

The survey is designed to give you an opportunity to state your opinions on how well you think the Library performs in relation to what you think is important. Your opinions are valuable and will help us understand how we can make QUT Library work better for everyone.

Course Materials Database (CMD)
You can get to the CMD through your unit’s Blackboard site. CMD gives you direct access to resources your lecturer has specified as most relevant to your unit.

Subject Guides
Subject Guides have been developed by the Librarians for each faculty to provide you with quick and easy access to a range of resources in your subject are. The green tabs across the top of the guide help you to navigate through the Librarian’s top picks.

Quick Find
Quick Find is a search tool that will search though the QUT Library catalogue and various databases to find a large range of resources all accessible to you for free as a QUT student.

Studywell
Studywell is a learning tool that provides a huge range of material to help you improve your academic skills. A quick look at the Researching section will give you access to a range of videos, presentations and information sheets about more effective researching, evaluating resources and critical thinking.

Ask a Librarian
Our friendly Library staff are available to help you with your research. You can talk to one at the Learning and Research Desk or chat online.

Writing a great assignment takes planning, but we often don’t know how what the stages are, or how long to spend on each one. That’s where the Assignment Calculator can help.

Simply enter in the due date, and the Assignment Calculator will calculate how much time you have to complete the assignment, and divide each step into manageable chunks. You’ll have a deadline for each stage, to stop you from getting bogged down in one step and run out of time for another. You’ll also find handy tips for completing each stage, and links to great resources on Studywell and CiteWrite.

So the next time you have an assignment to do, let the Assignment Calculator do the planning for you, leaving you free to focus on the task itself! 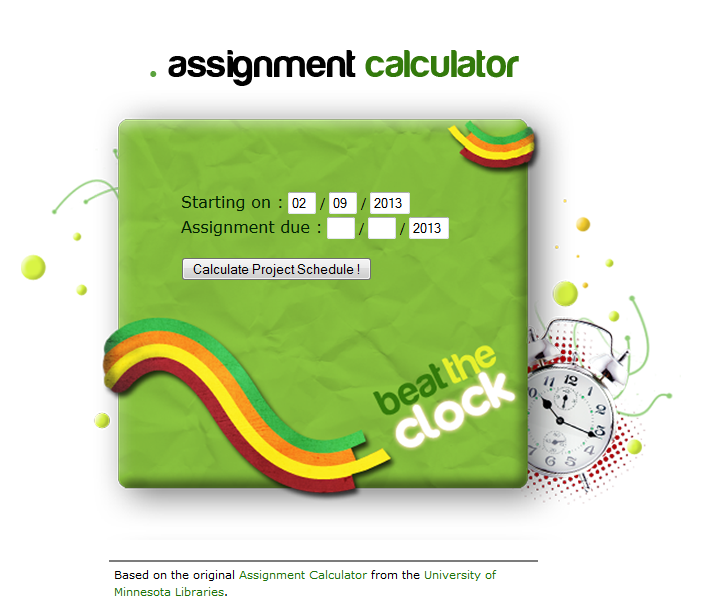 Scopus is one of the world’s largest abstract and citation databases across all subject areas. The coverage of Scopus includes:

Citation information is available for articles indexed from 1996 with plans to add citation information from 1986. Find out who is citing you, and how many citations an article or an author has received. A number of applications are also available to track, analyse and visualise research.

Contact Ask a Librarian for more information or assistance to use Scopus or any of its supporting applications.